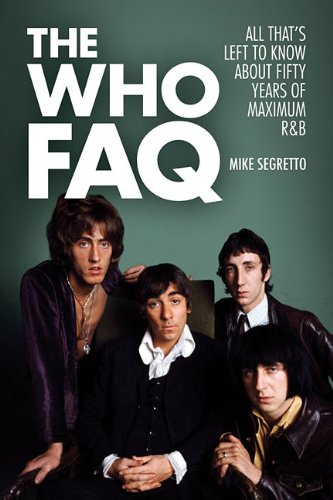 Mike Segretto is not a professional writer, or even a music journalist. Instead he is the admin for the Psychobabble blog (link below). Reading The Who FAQ is essentially the equivalent of spending several years perusing his and other online forums devoted to The Who in that what you get is mainly opinion and minutiae (Who were all of Roger Daltrey’s girlfriends? What was the difference between the French and Portuguese versions of the “Magic Bus” single?). But I’m guessing the publisher knows that the only people likely to buy this book are obsessive fans anyways. So forget about the easy stuff that’s already been released in book or DVD form (or even online). This is for those who really need to know the full story behind the aborted Lifehouse project. Or who are dying to learn the identities of every sideman who ever recorded or performed with The Who. To give it credit, The Who FAQ does also try to set the record straight regarding Pete Townshend’s child pornography scandal, and it unearths some of the less savory sides of the band members that other authors were perhaps a bit too squeamish to get close to. Where the book primarily fails is that Segretto is clearly not an objective reporter, so many of his assertions and claims lack a certain amount of verisimilitude. Readers might also squirm at his occasionally clunky turns of phrase. But for those who hunt down obscure “My Generation” EPs on eBay? Highly recommended.

Related artist(s): The Who

The Collectors - The Collectors & Grass and Wild Strawberries – The Collectors hailed from Vancouver, Canada, not exactly a hotbed of the worldwide psychedelic scene, which maybe helps explain why they didn’t make a bigger impact. Their two albums, though...  (2005) » Read more