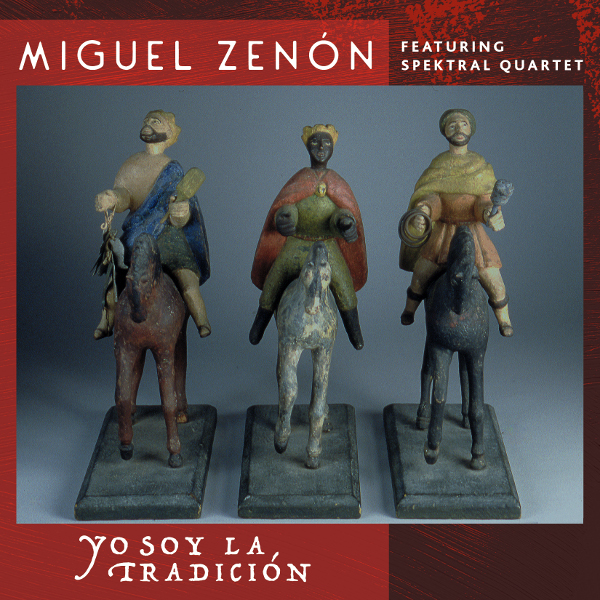 I’ve heard a couple of Miguel Zenón’s previous albums, but while they were good efforts, neither prepared me for this wonderful recording. Zenón is a saxophonist and composer from Puerto Rico, and Yo Soy la Tradición is a set of eight tunes arranged for sax and string quartet. This kind of venture is full of risk, combining a lead instrument that engages in improvisation and a backing that must be largely composed. All I can say is that Zenón succeeds on every level. The string parts are wonderful, ranging from languid melodic parts harmonized like something from the first quarter of the 20th Century (Ravel or Debussy, perhaps) to rhythmic parts with a latin touch (sophisticated Piazzolla maybe) to pointillistic parts with a hint of minimalism. In all cases, this is not the work of a dabbler or dilettante — this is seriously good writing for a traditional grouping of instruments. The performances are spirited, with the Spektral Quartet attacking the material vigorously without a hint of the stiffness that sometimes mars the performances when classically trained musicians attempt music with touches of jazz. And then there’s Zenón’s sax playing, which is also a joy to listen to. He is fluid and imaginative, expressive without being overwrought, and manages to fit acrobatic flights into the unexpected context. He occasionally brings a little grit to his tone, though there’s no squawking here. I’ve listened to Yo Soy la Tradición maybe a dozen times so far, and I’ve enjoyed every moment of it, noticing new twists and subtleties with every repetition.

Lives & Times - Waiting for the Parade – Ever since hearing this duo on the compilation A New Idea of Heaven about four years ago, it seemed like their sound had a lot going for it. Last years' A Pull of the Tide fine tuned their unique...  (1994) » Read more