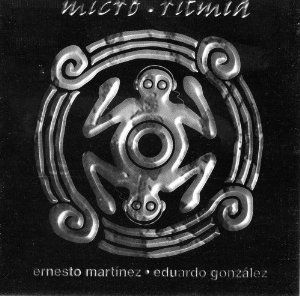 Despite the supposed 1986 release date on this, it must have languished in total obscurity for several years. The first this writer ever heard of this duo was on the Margen sampler, reviewed a couple issues back; several months later a couple mail order catalogs carried it briefly, which is how we got our hands on it. While the origins of this effort represent the more academic side of the musical spectrum, it remains interesting and enjoyable nonetheless. Ernesto Martínez and Eduardo González play piano, synthesizers, marimba, and a creation of their own – the Zamponifono (a sort of wind based instrument capable of playing rapid sequences of notes). Using duets of two pianos, or two marimbas, or whatever, they explore the micro-rhythmic patterns (placing notes in the spaces between notes) to achieve a sense of hypervelocity in the music, thus breaking the barriers of conventional mechanical and electronic instruments. While their compositions tend to be self-indulgent and a bit on the sparse side arrangement-wise, what they do offer is typically very dense and busy, and high on the notes-per-second scale. While it’s difficult to draw comparisons, this writer is sometimes reminded of Battiato’s more experimental works from the late 70s. Unique and different.