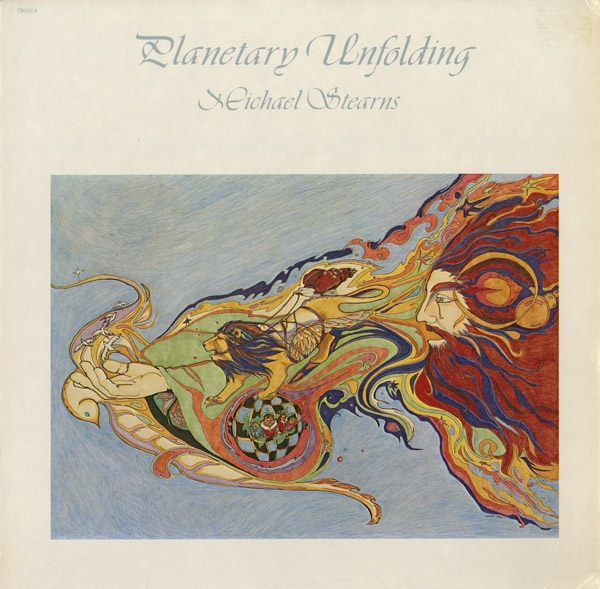 If Morning Jewel was about the slow album-side rise from silence to peak, Planetary Unfolding worked a similar magic with smaller compositions. Like a lot of his early albums, the move from the original LPs came with the loss of the great original covers, which is why the original is pictured here. Morning Jewel had an almost meditative concept to it with its tribute to the sunrise, while Planetary Unfolding, like his later release Encounter, had that interest in the great infinity of space and the unknown. Much of the synthesizer work for this was done on a Serge modular synth and just like Morning Jewel, this has to be one of the earliest works of ambient electronic music, its sound clouds shimmering with sequencers and effects from crystalline to foghorn. Unfolding is really a perfect description for its compositions, so much of the sounds spiraling up from the simple and the quiet to expand and unfold into huge breathtaking vistas.

Originally released in 1981 on LP and cassette, Planetary Unfolding — a six-part ambient-electronic masterpiece performed on the Serge Modular Synthesizer — has long been recognized as one of Stearns’ finest works, and as old as it is, it has aged well over the years and still sounds as fresh and powerful today as it did way back then. The album was reissued on CD around 1985, and besides some CDR issues and mp3 and FLAC downloads, it hasn’t been available in any physical format in decades,. But now, after a very long wait, it’s available again, and the real story here is that Planetary Unfolding is the first release of a forthcoming Michael Stearns reissue campaign on the esteemed Projekt label, with a dozen more reissues of his other early classic titles to come after this one. At this point I’m not sure of the timeline of the reissue series will be, or exactly which titles will be reissued, but as they appear you will certainly hear about them here. The six tracks, beginning with “In the Beginning...” brings forth the composer’s vision of the cosmos, building slowly and purposefully with swirling swells of sparkling electronics and floating ambient bliss. One won’t know when one track morphs into the next, as the end of every movement is adeptly crossfaded with the beginning of the next, the sole exception being the end of “Wherever Two or More Are Gathered...,” which was the split-point between the two sides of the original LP and cassette. The second half commences with “Life in the Gravity Well” amid some shimmering and stunning synth sounds with a mysterious female voice scaling the heights, in what may well be the high point of the entire endeavor. Approaching near silence at the end, the next movement, “As the Earth Kissed the Moon,” begins with the subtle sound of birds intermingled with synth pulses and textures as the piece grows and evolves, commanding the listener’s full attention, making way for another celestial voice near the end as we move to the closing section, “Something’s Moving,” beginning with some sequenced synthetic percussives in a seemingly farflung galactic swell. Looking back on the impact of Planetary Unfolding on the evolution of ambient electronic music, its importance cannot be overstated.