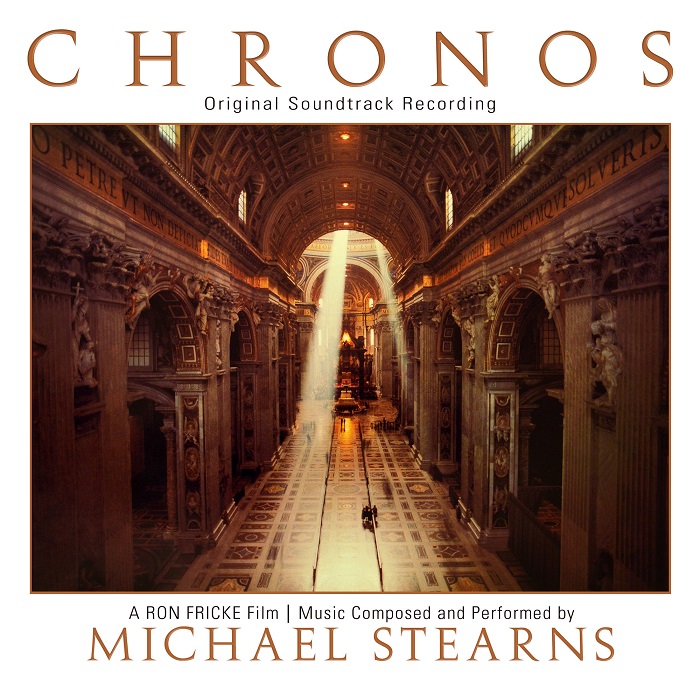 The first of three collaborations with filmmaker Ron Fricke, Chronos dates back to 1985, a period when Michael Stearns had already established himself as a composer through his six previous releases dating back to the late 70s. Chronos was composed in real time as the film was shot, the soundtrack for an IMAX 70mm production that was released for the giant screen in surround-sound format, a series of moving images, earthbound and aerial shots of prairies and cities and pyramids and celestial bodies, an immersive visual experience that Stearns’ soundtrack fits into perfectly. Immersive is the keyword for Stearns’ composition and arrangement as well. One doesn’t really need to see the film to appreciate what’s going down, as the imagery is suggested by the music, fading in slowly and deliberately. Performed on various synthesizers, the eight tracks crossfade seamlessly except for the program’s midpoint where the original LP needed to be turned (it was originally released on both vinyl and compact disc formats). The opener, “Corridors of Time,” gradually brings the listener into Chronos’ world, each element unfolding one piece at a time, with powerful bass tones growling up from deep under. But it’s the second track, “Essence and the Ancients,” where the program eases back and simmers with beauty, rising up from near silence one can hear distant percussive echoes amid the gentle strands of tonal color streaming in the foreground. The first side comes to a powerful climax with the heavily sequenced “Escalator,” the speed ever-increasing until it all disappears into the vapor that slowly becomes “Voices,” a dense wall of shimmering sound that will leave the listener in awe. The epic continues until we reach “The Ride (Finale)” which builds slowly until what might seem like a sudden blast into outer space, to the program’s cosmic conclusion. One additional short track accompanies the film’s credits at the end, something of a reflection of all that transpired previously. With or without the accompanying film, Chronos stands strong as an immensely beautiful soundtrack for the imagination.