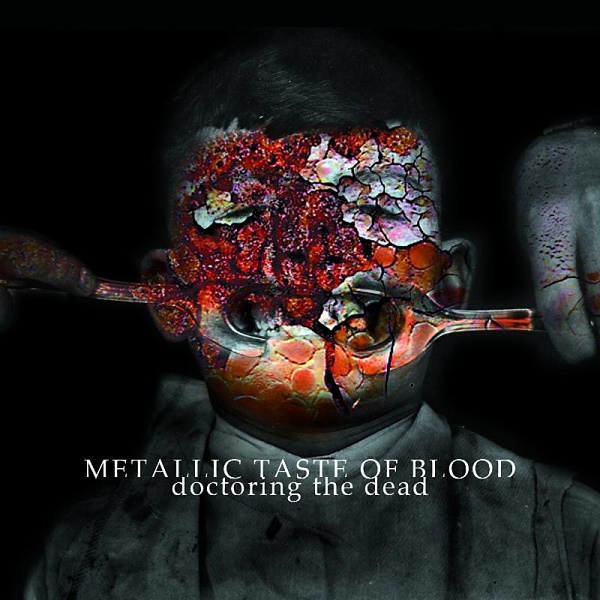 Well, if they’re going to use the term “math-rock” on their website, I can use it too, at least for comparison. First, I’d say Metallic Taste of Blood doesn’t sound like any math-rock band I know of, and if I were asked to sum them up in a short phrase, I’d say “noisy avant-rock.” There may be some odd meters involved, but they are far from being the most notable thing about the music – which is Eraldo Bernocchi’s guitar playing, ranging from sheets of fluidly shifting noise to spaced-out echoes of clean sustained tones. What he doesn’t sound like is any other guitar player I can think of. At times it may seem that Metallic Taste of Blood is a 90s King Crimson crossed with Boris in one of their doom-drone phases, slow, heavy, drop-tuned. There are breaks from the wall of low sounds, like a really fun Belew-on-acid bit in the middle of “Ipissimus,” some appropriately freaky synthesizer work from guest Roy Powell of Interstatic on the title track, and the relatively fast riff on “Pashupati.” While I enjoy the album a lot, its fault is the too-frequent return to their default sound: plodding tempo with the same tone on the guitar (it’s a really cool sound, but anything overused can get old). That’s why the previously mentioned breaks are so important, and why the role of Colin Edwin on bass is crucial. (Incidentally, it’s also why listening to Doctoring the Dead on headphones, especially earbuds, would prove unsatisfying – much of what makes the music work might well be inaudible.) His differing tones in the low register are generally kept clean, as distortion would only make him disappear into the guitar sound, and sometimes even have a slinky feel reminiscent of Mick Karn. While the guitar is playing long sustained tones, the bass is active, if not exactly busy. Metallic Taste of Blood is definitely worth checking out, and cranking loud on a system that can give you the full dynamic and frequency range.