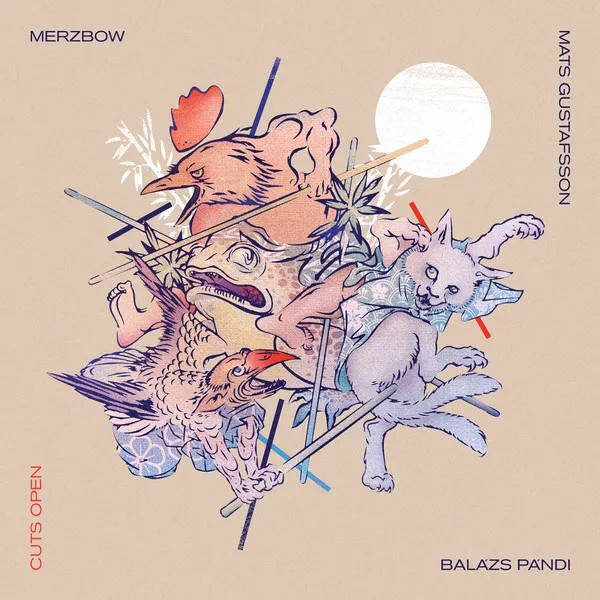 While I’m not really one to be pigeon-holing music into genres or categories, I’ll readily put Cuts Open into a box labeled “Free Noise.” Those two words sum up exactly what a listener can expect — and in large quantities — from this recording by Merzbow, Mats Gustaffson, and Balázs Pándi. These three explorers improvise their way through four long tracks sprawling to nearly an hour and a half, and to their credit, they don’t fill every moment with sonic assault. There are lots of quieter moments when eerie noises creep in and out of audibility, indistinct and gauzy. These moments are often punctuated by blasts of loud static and other forms of noise like lightning flashes out of the darkness. Of the three creators, Pándi is the one whose work is most apparent in the mix, consisting of recognizable drums, cymbals, and percussion instruments. The others are credited with percussion as well, and all three have “electronics” listed. Gustaffson’s flute and saxophone are not heard consistently, at least not in any recognizable form — sounds consisting of identifiable notes are generally avoided. The tracks are titled “I Went down to Brother,” “And We Went Home,” “We Went up with Mother,” and “He Locked the Door,” but if that’s supposed to imply some sort of narrative, it’s beyond me how the sounds apply. Obviously this music is not intended for mass consumption, but presumably it has an audience. When it comes to judging the merit of Cuts Open, I am at a loss. For the most part, I don’t find it annoying, but it makes no emotional connection with me. On an intellectual level, there are some fascinating sounds from time to time, but nothing to hold my interest. In the truest sense of the word, it’s just “noise.”