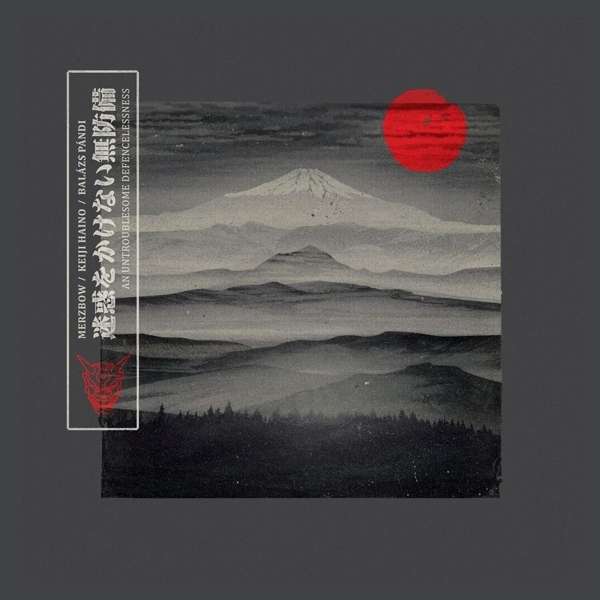 With the names Merzbow and Keiji Haino on the cover, you’re probably not expecting pastoral compositions for acoustic instruments. Rather, you might even expect a continuous blast of distorted noise. In the case of An Untroublesome Defencelessness, you’d be wrong on the second expectation at least. I suppose that in comparison with some of the recordings Merzbow and Haino have been involved with, this seems practically pastoral, but compared to most music, it’s definitely on the noisy side. The album consists of two improvised suites, “Why Is the Courtesy of the Prey Always Confused with the Courtesy of the Hunters…” and “How Differ the Instructions on the Left from the Instructions on the Right?” which are divided up into numerous tracks ranging from just under two minutes to nearly 14. With his instrumentation consisting of a drum kit Balász Pándi’s contributions are most distinctive, and he’s in a fairly aggressive free-form mode for most of the duration, tempo-keeping never being on his agenda. Haino’s playing is sometimes recognizable as originating with a guitar, though he rarely plays chords or melodies, instead focussing on notes or short phrases mangled by effects and feedback. Such atonal thrashing is obviously not going to be to everyone’s liking, even among listeners who enjoy free improvisation. Merzbow’s contributions are even harder to identify, consisting of manipulations of raw noise, rarely featuring any pitches, either in the realm of pure noise or with wailing tones sweeping up and down. Needless to say, An Untroublesome Defencelessness is not likely to be hitting the pop charts anytime soon, though curious listeners who have enjoyed some of Richard Pinhas’ collaborations with Merzbow might want to see what happens when you move a little further out from safety.