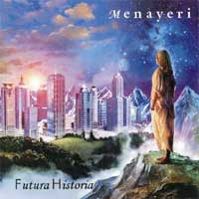 Menayari are three piece act who hail from Puerto Rico, a location not previously known as a stronghold of progressive rock. Futura Historia finds the group in an incarnation with female vocalist Sonia Ivelisse delivering lyrical imagery for the group’s second studio recording. Arrangements for most pieces fall squarely into the niche covered by bands such as Cast, Jadis or IQ with heavy reliance on guitar, bass and drum unisons with flying synthesizer wailing. Drummer Enrique Ocasio has done a creditable job sequencing keyboard loops with kit and helps ground the songs for the guitarists to riff over. Ivelisse has a firmer grasp on the band’s ballad style passages as heard on “Revolución en El Alma” that showcases the best aspects of the band’s prowess. The band digresses into a bit of uneventful hard rock on “Tiempo de Volve” and includes some ill-fitting cello on “Apertura.” The group is still forming an identity due in no smart part to the nimble fingers of guitarist Eduardo López. His Alex Lifeson style riffing on the title track will give many listeners a handle on his influencers and what direction he’s heading. “Hada del Lago” is the longest piece on the disc and it’s a classic tour de force for guitar and drums playing headlong into a serpentine passage. As the group is looking for a new vocalist, it’s unclear when the next incarnation of the band will surface.