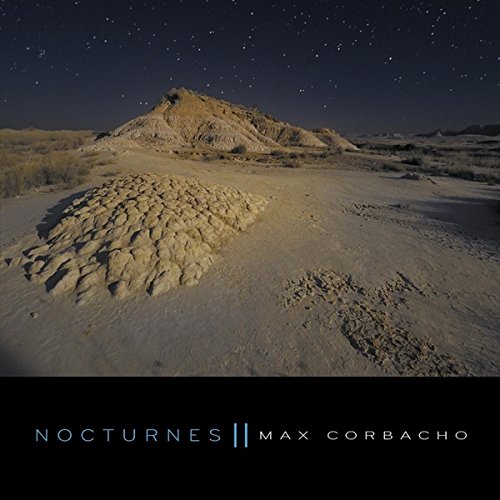 This is the second of three (I presume) of Max Corbacho’s Nocturnes series; the first (which I confess I have not heard) was issued in 2017. The style, as might be suggested by the artwork, is pure atmosperic ambient space music composed and performed exclusively on synthesizers with samples and effects. Corbacho has been honing his craft for over 20 years now, with as many releases, and although this is only the second of his I have heard, I feel like I know his style very well, a sound that fits well among his peers like Steve Roach, VidnaObmana, Michael Stearns, Robert Rich, and Brian Eno. Nocturnes II is a head first deep dive into a world of shimmering stillness, where slow-moving sonic textures breathe slowly and colorful ambient riches ooze from its core, with subtle ribbons of light and color wrapping around the listener as the program proceeds. The 23-minute opener “Celistia” sets the mood, establishing a living, breathing textural soundscape of slow evolution and organic introspection, leaving the listener suspended between starlight and shadow as the sky arcs slowly around. It is the opener and the gateway to the remainder of a mysterious world, as we move along to five somewhat shorter tracks that present further depth and power. Curious sounds, perhaps heavily processed samples of field recordings, make themselves heard in “Heart of the Night,” momentarily obscuring the ongoing textural veil. From the third cut onwar to the end of the 70-minute set, all of the tracks crossfade, making for truly immersive experience that shifts slowly as it continues, with a shadowy mystery to it all. There’s nothing sudden or jarring here, no percussion, no sounds with edges; everything smoothly glides together, bridges across warm night winds over cool bridges of stunning beauty, leaving the listener in a dreamy state of solitude. One might be reminded of The Ambient Expanse, a 1998 album that featured compositions by Vir Unis, Steve Roach, Stephen Bacchus, VidnaObmana, and Patrick O’Hearn. The music on Nocturnes II is of course more dark and introspective, but the feeling it creates in the listener is much the same.

Cargo - Cargo – Cargo was a Dutch band that released this apparently now highly sought after album in 1972. Their 4 piece lineup featured dual guitars along with bass and drums. Sounding quite similar to countrymen...  (1994) » Read more