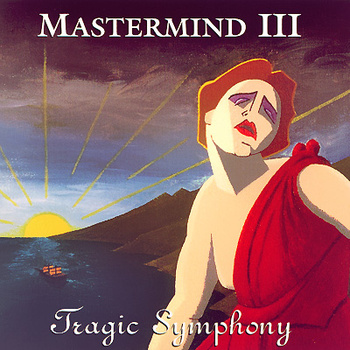 Mastermind's third album is the first to see release on a major label. Mastermind are Bill and Rich Berends (brothers from New Jersey) who continue on in Volume III much as they did with the first two, with a few minor differences. First off, it is worth noting that both guys are top notch players. Bill (guitars, vocals, and guitar synth) is a phenomenal lead player who deliberately plays over the top most of the time, but it works better than you'd expect. The trademark element is of course the guitar synth, which he uses to tear into very Emersonian moog-type lines. Brother Rich plods along busily below the surface, propelling the music with some heavy drumming that sometimes falls on almost-metal stylings (although less here than on the previous efforts). Along those same lines, more space is made for mellow passages, and some tasty classical and acoustic guitar parts. Certainly, they are more restrained here than ever before, and with an album that clocks in at less than an hour for once, Volume III is far more palatable than anything they've released to this point. The biggest problem (and it's a big one indeed) is the dismal singing by Bill. On the Blake-based "Tiger! Tiger!" he struggles just to find the notes, which could have been easier had he written a melodic line in the first place. The Greg Lake-type ballad "All the King's Horses" falls into the same boat, as does the centerpiece "Tragic Symphony." The only long instrumental break closes out the album, and by that time you'll be plenty relieved to know the vocals won't be returning. Bill Berends is simply trying to bite off more than he can chew (artwork, writing, guitars, guitar-synth, bass, vocals, producing too) and with a plate that full it's hard to excel in every category. My suggestion would be to recruit a dedicated bass player, singer, and producer – then this band would really shine. Fans of the first two will certainly enjoy this one and it's probably a good place to start for those who've heard this band hyped before. Guitar freaks will be suitably impressed with this offering as well.

Upon first hearing "Tiger! Tiger!" (a neo-prog/hard-rock adaptation of the famous William Blake poem and the first song on the album), I didn't have high hopes for the rest of the album. But I gave it a chance, and it's good that I did, as the album gradually gets better and better with each successive song. True, the rhythms won't make a musical theorist gasp in awe – in fact it was the rather simplistic drumming that turned me off at first – but the album has other charms that make it worthwhile. For what is essentially a two-man band, Mastermind can boast a remarkably full sound. All the synth sounds were expressed on Midi-guitar, a fact that surprises me to no end. While listening to this, I keep thinking, "This keyboardist is pretty good," only to remind myself that there are no keyboards on the album! The synth chords are phrased in such a way that it sounds as though they were played by a keyboardist. In fact, the synth-parts sound curiously Emersonian. The guitar sound is quite varied, varying from prog-metal pyrotechnics to dignified Floydian lead lines, alternately raw and bombastic. Vocals, while unremarkable, aren't intrusive enough to detract from the music, though all the tracks but one are prominently vocal. Lyrics ("Tiger! Tiger!" being the exception) seem to have broken, sorrowful love as their primary theme, intensifying the album's title. They seem to draw on poetry of the Romantic period as their primary influence. As previously stated, the album starts off slow and gets progressively better. It's the fact that they begin with their worst song (a song not even composed by them, by the way) which is perhaps the worst aspect to the album. But the album gradually builds, reaching its climax with the 13-minute "Into The Void", an instrumental with powerful guitar/ synth-guitar/bass themes. Neo-prog fans will get into it immediately, fans of less conventional prog require a number of listens to fully appreciate it.

Ever wonder what happened to progressive rock? Especially the rock part? Wonder no more. Mastermind has returned with a third album that is every bit as potent as one might expect after the heavy hints dropped by their second album Brainstorm. Driven by guitarist/vocalist Bill Berends (who doubles on bass for recordings) and exceptional drummer Rich Berends, their sound and style is a natural development from the hard-driving power rock of the late-60s/early-70s, taken in a progressive direction, fused with classical ideas and laced with the trappings of nineties technology. The basic three-piece sound is enhanced by the use of midi-guitar controlled synths, which effectively adds keyboard sounds into the mix. This is, in fact the trademark Mastermind sound which was refined and perfected on their two earlier albums – that "I don't believe there's no keyboardist in the group" reaction that in fact was my first response to hearing these guys. "Tragic Symphony" opens with Virgil Thompson's classic William Blake adaptation "Tiger! Tiger!" catchy enough to be the album's single, if need be. After the lengthy "Power and the Passion," Mastermind offers what is surely an exception to their sound – "All The King's Horses," an acoustic guitar driven ballad. The entire last half of the album comprises the three-part, 27 minute "Tragic Symphony" culminating with the powerful and blistering "Into the Void." Certainly if this fourteen minute instrumental track doesn't move you, you are no longer among the living. The fluid guitar leads on "Sea of Tears" – the first of the three parts – are especially noteworthy. The vocals throughout are competent and unobtrusive, but on "Power and the Passion", it's clear that Berends is in a little over his head in the vocal department. This, in fact, is the album's only flaw. Regardless, I must say this is one of the better releases in recent memory, living up to all the expectations. Once again, Mastermind packs a powerful punch.