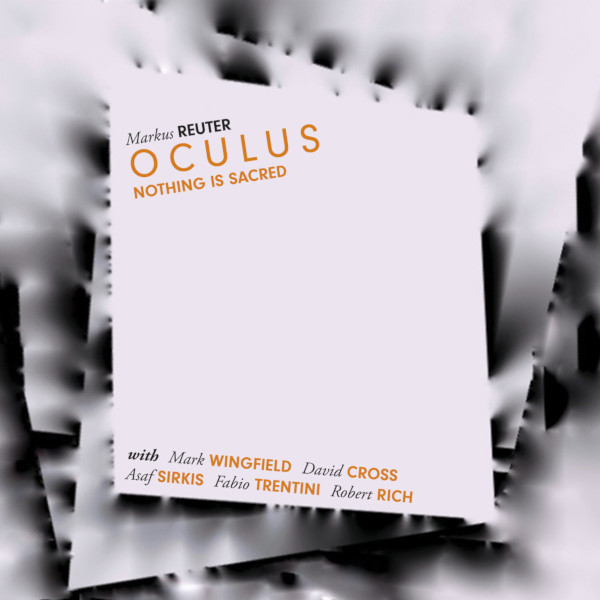 Oculus presents another wrinkle in Markus Reuter’s ever-changing array of ensembles. The basis for these five tracks lies in performances by Reuter (Touch Guitars, keyboards, soundscapes), Fabio Trentini (bass), Asaf Sirkis (drums, percussion), and David Cross (violin, electric piano). Those live performances were then augmented by overdubs from Mark Wingfield (guitar) and Robert Rich (textures). That’s a fairly unconventional way to make an album, but it moves farther out of the realm of expectations due to the nature of Reuter’s compositions, which gave the live players strict guidelines for their parts, though not exact notes, thus blurring the lines between premeditated composition and improvisation. Reuter says that his rules “disallowed the musicians to play intuitively,” though I think it’s safe to say that the distinction between intuition and intellect in such a setting is quite blurry. In any case, a listener need not be aware of the underlying process used to create the music to appreciate it. Nothing Is Sacred is another fine entry into the growing body of Moonjune collaborations, and each of these pieces, which range from ten to almost thirteen minutes in length, is a fascinating sonic adventure. Sirkis gives us inventive rhythmic backing and Trentini’s fluid fretless bass is by turns funky and melodic, with some of the slippery elements that made Mick Karn’s work so distinctive. Reuter’s contributions are harder to pin down, especially when presented in the context of so much other sound, though of course he is the driving force behind the whole thing. Cross is often similarly obscured, though parts recognizable as violin or electric piano do crop up here and there. I’d have to say I’m not sure whether the name Oculus applies to this particular combination of musicians or to the process used to create the music, but in either case, this first result is outstanding and I’m completely on board for whatever comes next.