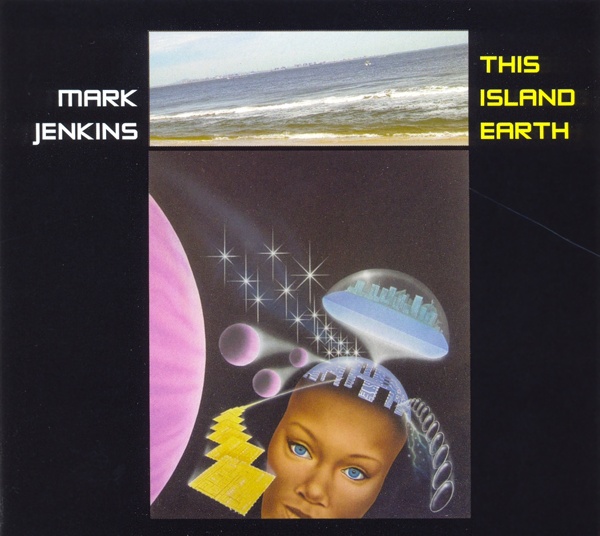 On the heels of his double CD Live in the USA, Mark Jenkins has released his 14th album This Island Earth. It presents three styles of electronic music: 1) a purely digital laptop-based composition ("New Jersey Shore"); 2) an analog and digital synth composition recorded in the studio and live in the USA in 2006 ("This Island Earth"); and 3) a classic analog synth composition recorded live in 2002 ("The Graveyard of Dreams"). It is interesting that Mark chose this order to put forward his new music as it significantly improves the more analog it becomes. "New Jersey Shore" is 17 minutes of uninteresting sterile arpeggios and other electronic noodling, nothing much to write home about, though Mark thought it was pretty cool to create music with simply a laptop and software. "This Island Earth" is a four-part Sci-Fi journey that maintains your interest throughout its 28 minutes with movie sound bites and Tangerine Dream-like instrumentation, timbres, and themes. The album closer, "The Graveyard of Dreams," is roughly 20 minutes of blissed-out old school Teutonic analog electronics replete with sweeping washes, electronic burps, squeaks, and driving pentatonic sequences. Mark excels in this genre and the shear richness of his analog sounds just blows away any of his digital efforts. "The Graveyard of Dreams" alone is worth the price of this CD. Bottom line, This Island Earth is a mixed release, but one worthy of notice.

Yes - Songs from Tsongas – Yes' management has done a pretty good job documenting the various incarnations of the group since the botched Keys to Ascension reunion shows from 1996. Ensuring the classic line-up was intact was...  (2007) » Read more