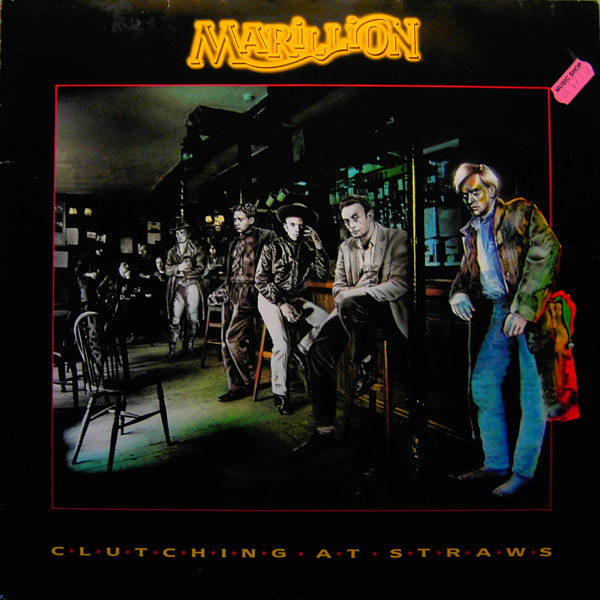 This EMI reissue has given me an opportunity I thought was long past: to review what I consider to be Marillion's finest moment. When I first discovered Marillion, I was dying for something new to listen to. Sure, they weren't exactly original, but with each successive album I was convinced they shed that comparison and emerged as a unique and original band (attested to by all the "Marillion clones" that followed). Marillion merged the lyrical and complex sound of old Genesis with the power and pomp of the 80s version. While the band was certainly an able bunch, the singer known as Fish was the defining element. Fish could unleash a stream of words that combined both the soul of the poet with the delivery of the Shakespearean actor. Clutching at Straws is a blatant self-portrait filled with lyrical brilliance and cute innuendo of excess. You really didn't need the booklet to sense the band was in trouble. In following with the other excellent reissues, 1987's Clutching at Straws is now 24 bit (the obnoxious purple border tells you so), digitally remastered and reissued with an entire disc of bonus tracks and comprehensive liner notes by the players in the drama that was to become the end of Marillion. I really don't need to say much about the album except buy it. If two seconds of "Hotel Hobbies" doesn’t convince you, what else can I say? The second disc contains "alternative" versions of "Incommunicado" and "Going Under," the excellent B-side "Tux On," a very different version of "White Russians," and "Sugar Mice." The remaining seven tracks are the demos from the band's next album which, of course, never happened - or did it? My viewpoint is this: These sessions allowed both parties to release one more mini-masterpiece-Fish's "Vigil in the Wilderness of Mirrors" and Marillion's "Seasons End." It's in these crude and inferior demo recordings that we hear the origins of that legacy. The music from "Beaujolais Day" becomes the outstanding "Season’s End"; "Story from a Thin Wall" is an odd track with the lyrics of Fish's "Family Business" combined with the music of "Berlin"; and "Tic-Tac-Toe" becomes "State of Mind." These early sparks show the creative process at work; however, they're not lost gems. Only "Exile on Princess Street" really rises and grabs you, and it would have made a great album cut. This reissue is a must for the fan and if you've never heard Clutching at Straws before, here's your chance. If this is Neo, Neo rules!