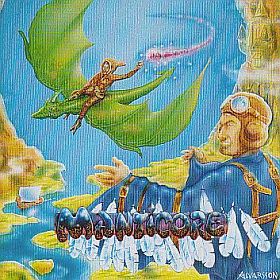 Manticore is a new outfit from Sweden and with that name a heavy Emerson, Lake and Palmer influence is bound to be present. The first track, "New Foundation," ripples with ELP right down to the main riff, which is almost a carbon copy of "Black Moon." "Running with the Stars" features the added touch of Ulf Holmberg's guitar and slides the sound more to the Genesis school of progressive rock. "The Manticore Theme" is an instrumental track and lets the whole band, Putte Eriksson (drums), Ulf Holmberg (guitars, Mellotron, vocals), Kjell Jansson (keyboards, vocals), Erik Olsson (keyboards, guitar), Goran Holmberg (bass, vocals), display their considerable musical talents. "Private Show" is one of three songs that feature Jansson and Holmberg trading off on lead vocals - all vocals are in English with just a touch of an accent. "The Maiden" opens with an acoustic guitar over the sound of the surf as it hits the beach. The song quickly breaks out into the album's most varied tune featuring a playful blend of symphonic progressive and some straight ahead rock. "The Way of the Seasons" is the eighth track and the band has settled into its own sound. A blend of the past with some of the more modern sounds, especially on guitar. The title track closes out the album with a classically ladened keyboard bonanza. Olsson uses several different keyboards to painted a richly textured musical canvas. Time to Fly was recorded in Uppsala, Sweden and mastered by Bob Katz at Digital Domain in New York City. The result is a sonic stunner and another winner from The Laser's Edge.