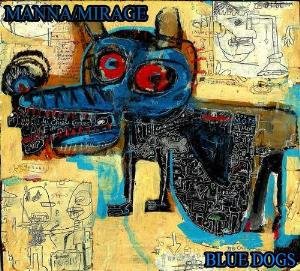 Blue Dogs is essentially a Dave Newhouse band project borne out of some of his own compositions originally intended for a Muffins album, but not so well embraced by other band members, Newhouse withdrew these pieces and decided to put them out on his own. The album title is taken from the album cover art created by Gonzalo Fuentes Riquelme. As one might expect from a project bearing the name of the Muffins’ first album, much of what’s here (seven tracks in all, about 35 minutes total) bears a strong resemblance to the Muffins’ early period sound, which derives much of its inspiration from the British Canterbury sound, and more specifically Soft Machine. Dave Newhouse plays all woodwinds and keyboards here as well as drums on about half the cuts, his son George Newhouse plays drums on a couple others, and Paul Sears drums on one track “Muffin Man Redux,” which also features some outstanding guitar by Mark Stanley, also featured on “Blind Eye,” which evokes a dark, repetitive zeuhl-like feel throughout, and probably ranks as my favorite tune on the album after the opener “Canterbury Bells.” Original Muffins founding member Billy Swann plays bass throughout, and Steve Pastena adds french horn to the lively jazz number “Shwang Time.” Anyone interested in The Muffins of <185> and before definitely needs to have this — it’s almost like a lost album from that period, though better produced. One problem, though, this has been out for a while now, and it’s a limited edition of 100; that means it’s starting to get a little scarce (though it can still be ordered on the Manna / Mirage website as of this writing). Hopefully it will be made available as a download at some point, because this is just too good to be limited to an audience of 100 listeners. Newhouse promises a least two more Manna/Mirage albums over the next three to five years.