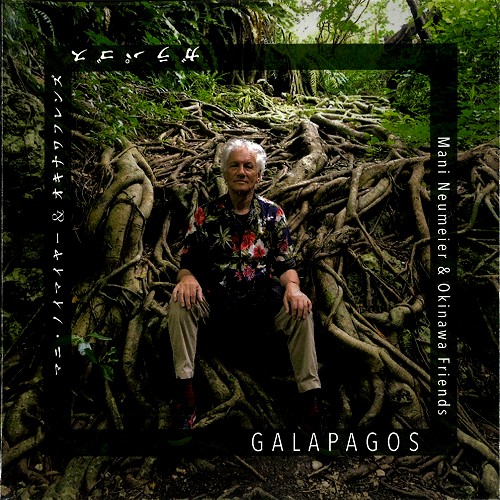 With Galapagos, Guru Guru drummer Mani Neumeier visits Okinawa and sits down to jam with his Okinawa Friends. The result is a loose rhythmic journey full of intriguing sounds. Neumeier provides drums and a very wide range of percussion; Kazuya Gacha Uechi and Sakamoto Kengo play bass; and guitars are handled by Halls and Ishihara Takeshi. I believe all of them play on all the tracks, as they’re credited as “right” and “left” guitar and bass. Sakamoto is a member of Koenjihyakkei, but the others are unfamiliar to me. In any case, these eight tracks mostly feature Neumeier himself, with his trademark jazzy grooves, and one of the unusual things he contributes is percussion made of coral, which has a tinkling wind-chime sound. “Sitting on the Banyan Tree” is one of the best tracks, starting with echoing guitar chords and a free-form drum part using brushes. Then one of the basses comes in with an insistent riff in three while the second guitar contributes sliding chords and the second bass plays a more melodic part in the higher register. Neumeier eventually turns his solo into a loosely-defined pattern and the other players vary their parts, eventually abandoning the original groove and moving into other territory. In addition to five substantial tracks ranging from five to ten minutes, there are a number of shorter pieces which are quite fun — off-kilter little grooves that may have actually been excerpted from a longer jam, as they fade in and out. Galapagos is an enjoyable excursion for these musicians, and while lovers of melody and harmony may be left cold, fans of Neumeier’s other work should find a lot to like here.