Make your own flag —
Björk live in Shanghai 2008

For once my timing seems to have been right on. It appears that I saw the first and last Björk concert ever to happen in mainland China. By now, most everyone knows why I say "last," and I'll get to my perspective on that in due time. I was living and working in Beijing, but this concert was a special enough occasion that I booked a weekend trip to Shanghai and pulled in some favors to get a good seat. 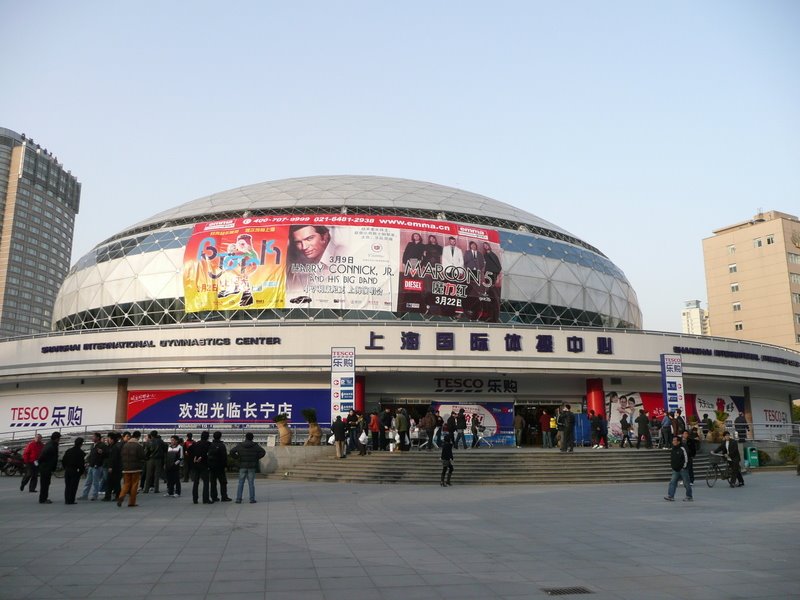 This concert review originally appeared on my Rocket to China blog back in 2008. It's being reprinted (so to speak) with slight revisions here.

The concert was held at the Shanghai International Gymnastics Center, which is in the western part of the city, but not too terribly far from the Zhongshan Metro station. One thing that seems a little odd is that there’s a Tesco discount market underneath the auditorium so you can save money on your shopping and catch a show in one convenient location. And if you need to shop for any kids’ things, there’s a Baby Mall below the Tesco. There was also a little wine shop called Trader Zhou's (pronounced basically the same as Trader Joe's).

There was a sign outside the entrance that said “No Cameras,” but neither I nor any others in the majority of the crowd had any problems taking pictures. The audience was about half and half Chinese and foreigners, which is pretty typical of attendance at performances by non-Chinese artists. 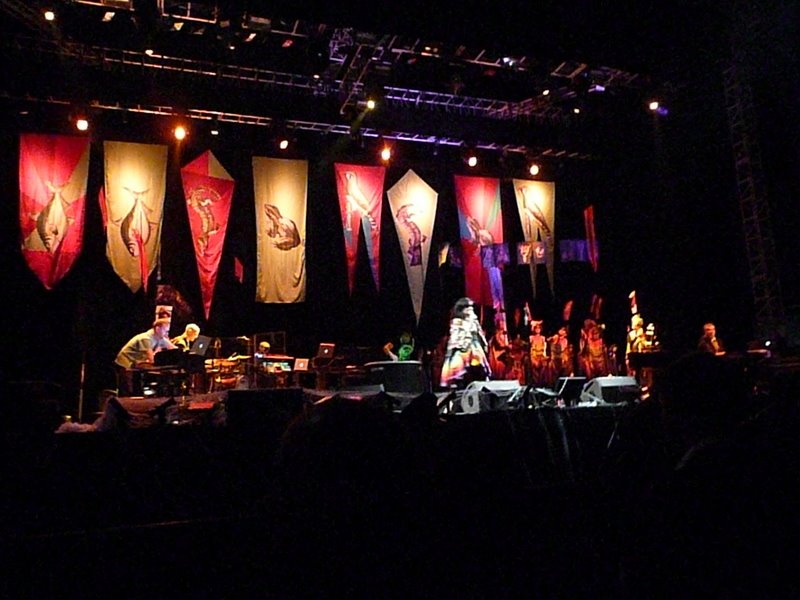 Björk is known for experimenting with different kinds of instrumentation from typical pop and rock lineups. This time she had a nine-piece brass section (three each of trumpets and French horns, two trombones, and a tuba), a keyboard player (clavichord, organ, piano and so on, all artificial of course), a drummer/percussionist, and two guys with laptops and keyboards. No guitar, no bass.

Anyone who’s heard her current album (Volta) knows that brass figures prominently in the arrangements, so those tunes came off much like the studio versions. The surprise was how well the arrangements worked on some of the older tunes which did not originally have brass, such as “Jóga” and “Army of Me.” I found it quite refreshing that the brass parts were not simple chordal accompaniment, but very nicely arranged polyphonic lines, with many touches of modern classical music. Kudos to whoever took care of that. And while there were no crazy solo spots for the players, all the parts were handled impeccably. 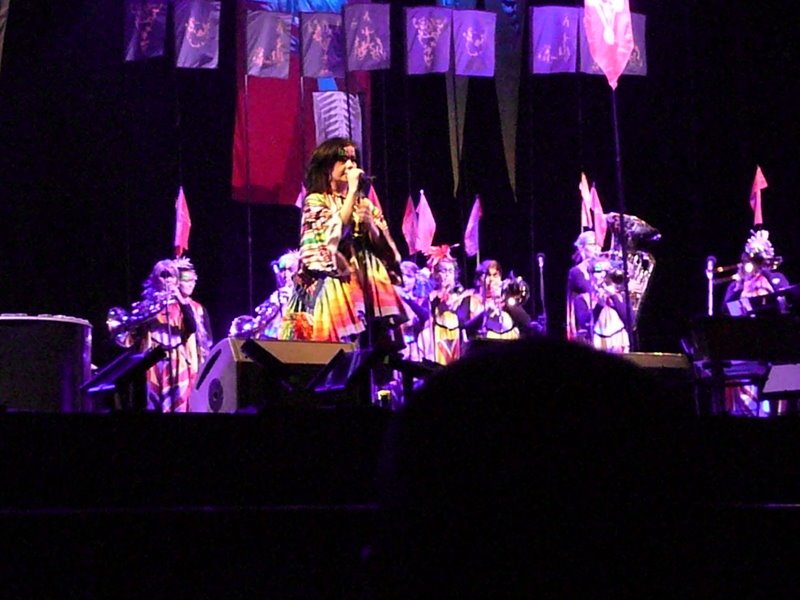 The show opened with an abrupt lights-out, then the brass section trooped in playing a catchy tune and wearing colorful costumes with flags attached to their backs, swaying with their movements. They took their places on the stage, and Björk came out to launch into “Earth Intruders,” the lead track of Volta. Her voice, the brass, and the electronics were all crystal clear in sound, loud enough to be impressive, but not so loud as to be uncomfortable.

The crowd was reservedly enthusiastic for the first four tunes or so, cheering loudly but stuck in seats (the priminent line of uniformed security at the front of the stage and lining the sides of the seating might have had something to do with that), until she asked, “Can you dance?” The result was an instantaneous eruption of bodies from chairs; the center aisle on the floor filled up, and people approached the stage barrier. Half a dozen extra security guys rushed out to keep people back from the fence, but from then on there was no sitting that I saw.

Things really kicked into overdrive when her hit “Army of Me” started. A green laser beam flicked around the room, hitting strategically placed mirrors, and the energy level hit a new high, both on stage and in the audience. 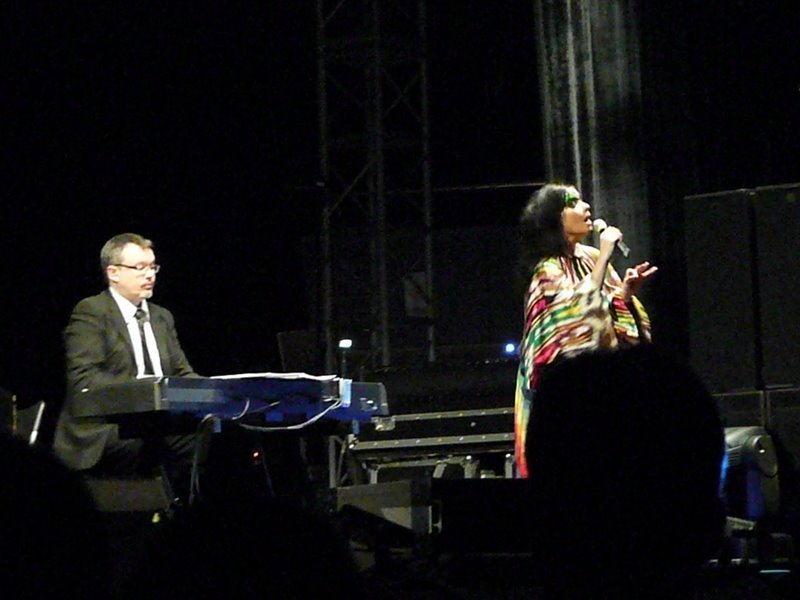 There were some quiet, reflective moments as well.

For me, as a fan of the new album, I didn’t mind the concentration on new material. There were enough old favorites to keep me happy: “Hunter,” “Pluto,” “Possibly Maybe,” “I Miss You” and so on. Sure, I could have wished for “Human Behaviour” but there is nothing she played that I regretted hearing.

All through the show, I was amazed at the strength, accuracy, and expression of her voice. I’m well aware that the excitement of seeing a good show can make things sound better than they really are, but I didn’t hear a single note off-key, and I noticed no vocal fatigue as the evening wore on. 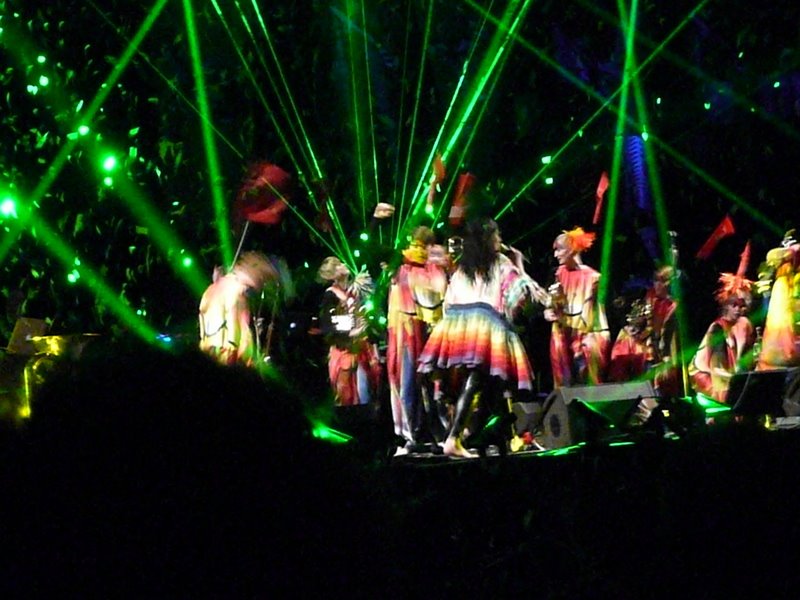 All too soon (around 9:30) Björk and crew left the stage. The crowd kept up a racket for a long time before the brass came out again, forming a half circle at center stage. Björk sang in the center, and when they segued into “Declare Independence” all the stops were pulled out. The lasers flashed around, the lights went crazy, everyone on stage was jumping around chaotically, and finally a snowstorm of confetti came over the arena.

Later, I heard many reports that she mentioned Tibet in the song, but I honestly did not hear it. Everyone was jumping up and down around me, and I was trying to get a photo around the 6’6” guy in front of me, and we were all chanting “Declare independence! – Don’t let them do that to you!” so loud that I missed the little interjections between the lines. Of course, when you’re in China, mentioning that an Autonomous Region should maybe have some other status (such as the one mentioned in the song title) is not looked upon kindly. It is not a subject of public debate. Once the story started spreading about what she shouted, people came to the likely conclusion that should she ever apply for a visa to perform (or even visit) China again, it was unlikely to be approved. There have also been stories that those at the Ministry of Culture who gave approval for her performance (given her track record on such issues) would be looking for new jobs. 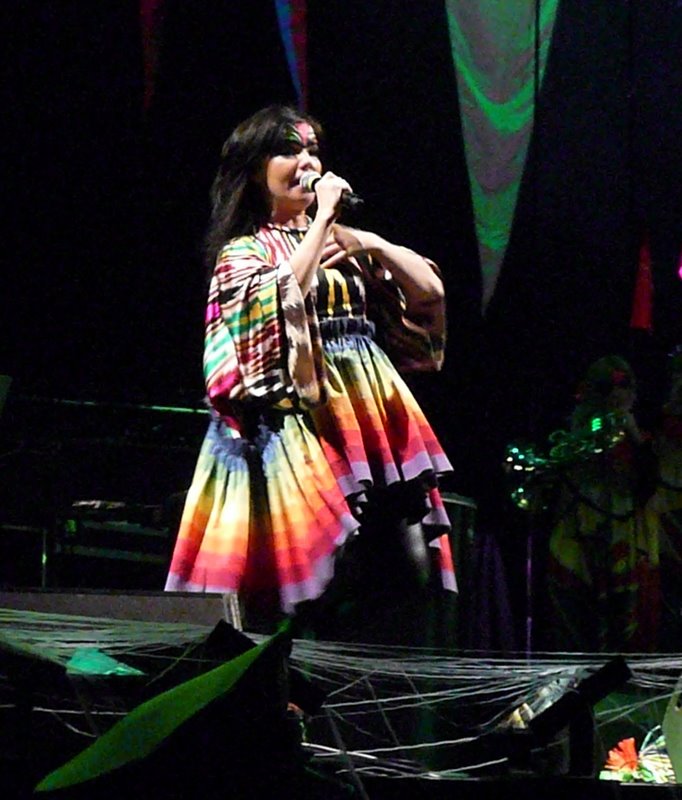 Anyway, this is a show that goes right up there in the list of all-time best shows for me, which puts it in pretty good company. And given the notoriety the concert has garnered over the time since then, it's kind of cool to be able to say, "I was there."

In spite of China's rapid ascension into status as a highly developed country, the experience of concert-going is kind of hit-or-miss. While the sound and staging were first-rate (and likely they brought a lot of the gear with them from overseas), some of the other factors were lacking. Restrooms were small and awkward to get to. And as far as I could tell, there were no concessions inside the building at all, nor any room for them – the concourse on the floor level was very small, and I think it was similar upstairs. The promoter, Emma, set up folding tables outside on the deck selling water, soft drinks, beer, and posters. For the drinks, they had 2-liter bottles, and for 10rmb they would fill a paper cup out of it. You had to get a wristband going out in order to re-enter, and luckily you were allowed to bring the cups in. I also saw people in the auditorium with Tesco bags of snacks and water bottles.

Neuschwanstein - Battlement – Neuschwanstein was a German band whose sole surviving artifact is their incredibly powerful album Battlement, originally released on the Racket label. The sound on the LP could be described as Planets...  (1993) » Read more

Citizen Cain - Somewhere But Yesterday – Further proving that the Genesis school of progressive remains in an exalted tier among the commandeers at SI (Synthetically Indignant — the original label for this album), here's the next hook,...  (1995) » Read more

Azazello - Black Day – The electronic drum kit will undoubtedly make or break one’s opinion of this release by Russian prog-metal quartet Azazello, depending on your tolerance for such a mechanical backbone. And if...  (2001) » Read more

Various Artists - Ambience Is Where You Find It – Perhaps that is true, but I can't say I found it anywhere here; neither of the old variety nor the new. Four names appear on this compilation, none of which I know: Urban Ambience, Emile...  (1997) » Read more