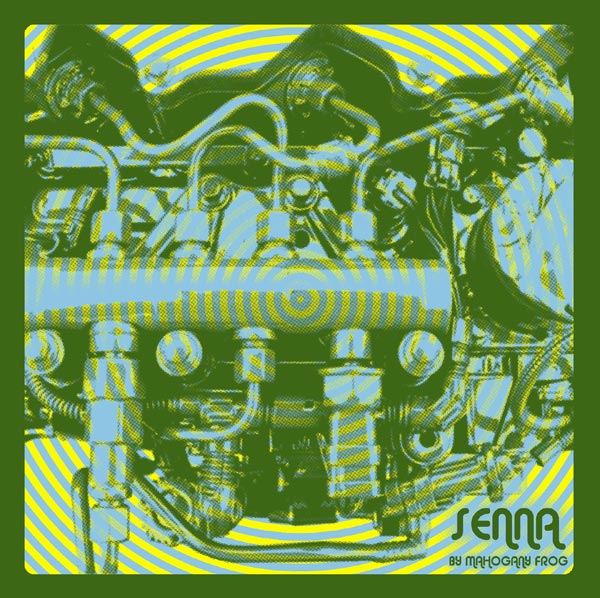 I've been hearing about Mahogany Frog for a few years now, but Senna is the first of their releases that I've heard. It starts with a stuttering keyboard part that morphs into a slow procession of chords on keyboards backed by skittering electronic percussion. The piece builds over the course of several minutes, adding in electric guitar, drums, and more keys. A distorted slide guitar enters dramatically, giving a vaguely Floydian tinge to the mounting mid-tempo pulse, and then, about three minutes in, suddenly the band slips into double-time for a frenetic close to "Houndstooth Part 1." "Part 2" builds its way up from a fuzzy 7/4 riff on the bass, with guitars and keys making a firm declaration of prog-rock intentions. The keyboards, which include some very unconventional sounds, are particularly effective, providing a classic sound without actually using typical instruments. There's a string sound that's heavily phased, and something a bit like an old Vox organ compressed and flanged, and something resembling the fuzz Lowrey organ from early Soft Machine. The arrangements also include occasional environmental noises, imparting a touch of psychedelia. Often music with such high degrees of processing applied to the source material can sound sterile and lifeless, but Mahogany Frog manage to make every part sound organic but twisted, as if heard through an inter-dimensional gateway from some other realm not quite like our own. This totally unique combination of elements is masterfully shaped into one of the finest and most progressive (adjective, not genre) releases I've heard in some time.

Unto Ashes - Grave Blessings – Given their penchant for unusual melodic angles, middle-eastern modalities, medieval and gothic stylisms, and folky mysticism, one would be amiss to review this band without mentioning some...  (2006) » Read more