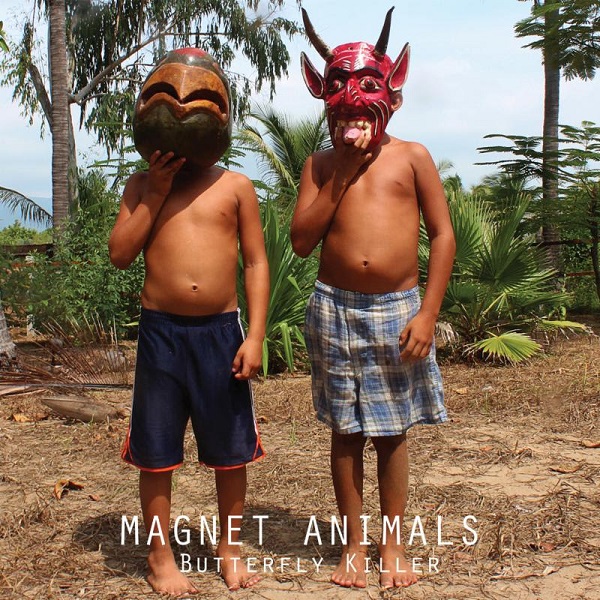 It seems no matter how many times I listen to Butterfly Killer, it never seems to make sense as an album. The music is very scattered somehow, with elements that seem to be working at odds to each other. But in the end I’ve come to see this as a strength rather than a weakness — it’s certainly a sign of creativity, that Magnet Animals have hit upon something truly their own. The group consists of guitarist Todd Clouser, whom we’ve covered before, along with Mexico City drummer Jorge Servin and two musicians who have worked in John Zorn’s New York sphere, Eyal Maoz (guitar) and Shanir Ezra Blumenkranz (bass). This is a far cry from the soulful jazz of Todd Clouser’s A Love Electric recordings, more in the realm of rock with some artsy, avant touches and a jazzy feel. There are some great rock riffs, as on the opener “Headphone Gurls,” which almost sounds like something Jimi Hendrix would have come up with, and lots of headscratching weirdness, often centered around Clouser’s vocals, which are mostly spoken and almost sound like spliced-together samples rather than something he did live. Several of the tracks feature multiple spoken parts that are out of sync with each other, like a chorus that can’t quite coordinate its efforts. At times, I’m reminded of the weirder parts of Axis: Bold as Love or Electric Ladyland. The guitar work is marginally blues-based, with frequent use of atypical effects, moving beyond typical distortion, chorus, and phase into ring modulators and the like. The two guitarists are not generally playing typical lead / rhythm roles, instead playing variations of the lead riff. Butterfly Killer is something of an anomaly in modern music, and worth investigating for adventurous listeners.