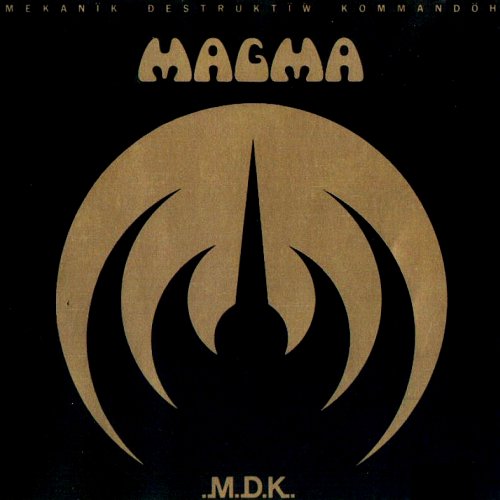 With the almost complete overhaul of Magma's lineup in 1972 came a similarly drastic shift in musical style and direction. Two of the group's main jazzmen, François Cahen and Jeff Seffer, departed to form Zao, and with them went virtually all traces of jazz from Magma's sound. Vander's first album length composition instead focuses heavily on vocals as the main melodic "instrument" and repetition as the primary structural device. Eight vocalists are utilized to weave layers of repetitive motifs with their powerful and insistent chanting. The other instruments are relegated to mere supporting roles, providing an incessant rhythmic drive and occasional harmonic and countermelodic figures to compliment the vocals. Vander's drumming is exceptional, subtly avoiding the spotlight while providing enough rhythmic variation and complexity to keep the melodic repetition from becoming overbearing. His drumming style has changed as well to fit the music; the jazzy feel and snare offbeats are less prominent, replaced by an often heavy downbeat emphasis evoking the marching theme of the lyrical narrative. The cumulative effect is both mechanical and dynamic; machine-like in the repetition yet always driving forward and developing towards the dramatic finale.