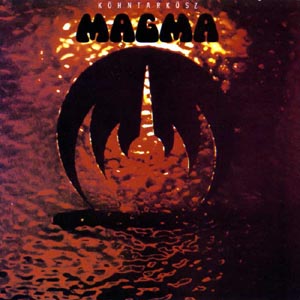 For the recording of Köhntarkösz, the Wurdah Ïtah quartet was augmented with two keyboardists and a guitarist, giving the band a much more flexible lineup. With Vander and Jannik Top also contributing keyboards, the band is able to create some of the most intricate and dynamic music ever recorded under Magma's name. Vander unquestionably reaches his compositional peak here, fulfilling the musical goals he'd been exploring since the first album. The epic title track, split in half over both sides of the album, is the embodiment of everything that makes Magma's music so remarkable. Melodically sublime and harmonically unfathomable, the music is dark and intensely fierce while maintaining a sense of ethereal beauty and haunting mystery. The simple three note ascending motif, which serves as the unifying element of the piece, is supported by countless harmonic and rhythmic variations, allowing the most repetitive element of the music to also be the driving force in the development of the composition. The voice continues to evolve as the primary melodic instrument, here avoiding lyrical content and simply singing syllables a majority of the time. The emphasis is now clearly on the music as the main vehicle for the Kobaïan narrative, the specific details of which have understandably become much more enigmatic. The two short companion pieces on this album, closing out each side as a sort of coda, presumably each highlight some element of this story. On "Ork Alarm" Jannik Top uses his cello combined with dramatic vocals to create a dark and frantic mood which rises to a furious climax. Contrasting that is Vander's "Coltrane Sundia," which closes out the album with a beautifully peaceful acoustic piano and guitar theme.

It's hard to remember a life before Magma, but one of the earliest impressions I have is seeing this in a record store and bringing it home. Even then their iconography set them apart from other albums on the racks, and they had that heavy mystique going: "They sing in their own language," "the music is really weird," etc. Back then they hadn't gone through their impressive revival phase and the CD reissues hadn't quite begun to happen, so everything was word of mouth and they had that lure of the transgressive in play. I bought Hhaï / Live around the same time and some of the fusion jams on that grounded the work a bit better for my tastes at the time, not to mention the live version of this album was at least as good. So Köhntarkösz ended up being a slow grower for me, but eventually it paid off hugely, something helped by repetition, other live versions and then getting to see them live myself. So while you can describe the album as a slow grower from a listener's perspective, the album itself does the same thing, it starts out strange, morbid, slow, and dissonant before developing slowly over its length and increasing its pace and managing to impart quite a sense of musical drama and theater as it goes. By the second side of this record (or the second half of the piece when played in full live), it starts to walk, then trot, and then eventually gallop to some really powerful climaxes, all while still remaining a bit claustrophobic and insular — in all the best ways. It remains really at the top of the list for difficult works worth sticking with, because once you get to know it, you actually anticipate and look forward to its bizarre development.