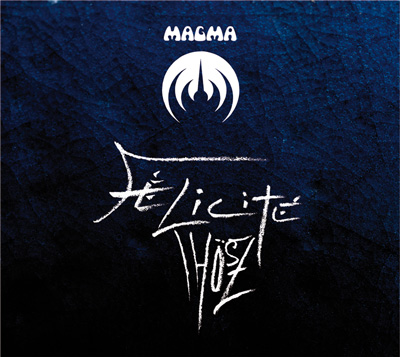 Since Magma reformed in the late 1990s, the band has been releasing mostly live albums and DVDs of their classic material, and two extended pieces of music (Köhntarkösz Anteria and Ëmëhntëhtt-Ré) that were written and performed in the 1970s, but never recorded at the time. The only newly written pieces that have been released are the two sides of the single Flöë Ëssi / Ëktah. That all changed with the release of the album at hand; Félicité Thösz represents the first long-form composition that Magma has created since the end of their classic period. Let me assure the reader that Christian Vander has not lost his compositional chops, and the arrangements, relying more on vocals and choruses for their power than instrumentation, are at once stunning and beautiful. The complete "Félicité Thösz" is comprised of ten sections that follow one another seamlessly, for a complete running time of just over 28 minutes. Four vocalists (including Vander, Stella, Isabelle Feullebois and Herve Aknin) are supported by vibraphone, guitar and bass, with Christian Vander handling piano, drums, and keyboards. The passion and warmth of this main piece is nearly unparalleled among Magma's previous works; this writer was unable to stop listening to it for days. Almost like an afterthought, "Les Hommes Sont Venus" is an entirely separate four-minute piece featuring six vocalists, with CV contributing only glockenspiel and some keyboards, but the result is splendid and heavenly, something one could listen to in a loop forever.

Glass Hammer - Perelandra – It's terribly sad to me that many people's impression of "progressive rock" goes no farther than Yes, Genesis, or their countless soundalikes. I don't want to be too hard on that...  (1996) » Read more