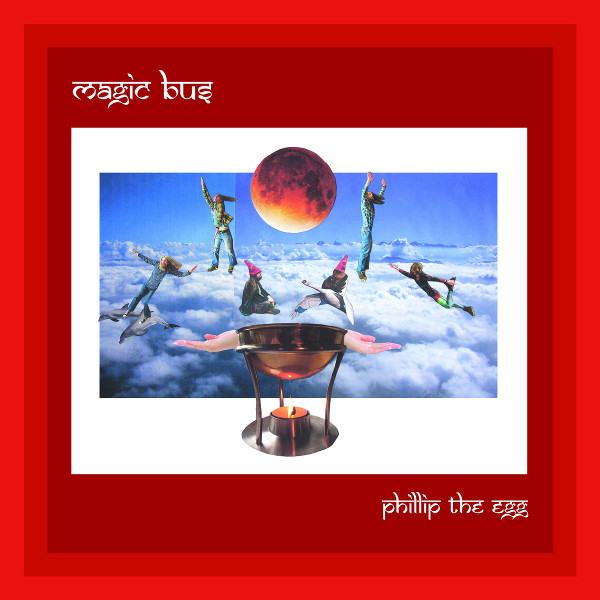 I first encountered Magic Bus via their Fruits de Mer single Seven Wonders / Eight Miles High in 2015. That teaser left me wishing for more. I had to wait for two years and now on May Day 2017 Magic Bus released their third album, Phillip the Egg, on their Back to the Garden Records label. Band members Paul Evans (vocals and guitar), Jay Darlington (keyboards and backing vocals), Terence Waldstadt (lead guitar and backing vocals), Viv Goodwin-Darke (flute and backing vocals), Wihil Mellorz (bass), and Connor Spring (drums) entered the studio and recorded these eight new songs and instrumentals that mix Canterbury with psych, jazz fusion, and prog over a period of nine days. The opening song “Mystical Mountain (i) Twelve Kings” is a melodic song that reminds me of Caravan’s “Golf Girl” and seems to last only about 3 to 4 minutes, with a pause followed by the Magic Bus launching into a new direction with a variety of changes in sound, emotion, and tempo. It is a little puzzling, but the music works wonderfully. The second track is the semi-ambient instrumental “Fading Light” that incorporates a bit of jazz fusion. The bucolic song “Trail to Canaa” follows with some exquisite flute, acoustic guitar, and Mellotron that recalls Steve Hackett’s early solo work circa Please Don’t Touch. Then they turn a bit experimental with “Zeta,” an instrumental of reversed tapes, Turkish prog themes, a bit of Gong, and an engaging synth solo. “Distant Future” also incorporates a dash of Gong as well as some Soft Hearted Scientists, reversed tapes, and dissonance into a complex and melodic instrumental. Then we encounter “Kepler 22b (i) The Root (ii) Zapruder (iii) Myrrh and Honey,” which over its six minutes takes us on a pleasant journey through jazz fusion, rock, dissonant Mellotron, and flute. As we approach the end of the album, Magic Bus turns trippy with the cosmic “Kalamazoo” and the Indian influenced drone based “Yantra Tunnels” and its simple ascending / descending riff that starts out like Yatha Sidhra and morphs into high-energy prog / psych rock. Though Phillip the Egg references the past, the Magic Bus is not a retro band and their album is unlike anything being produced today. So check them out.