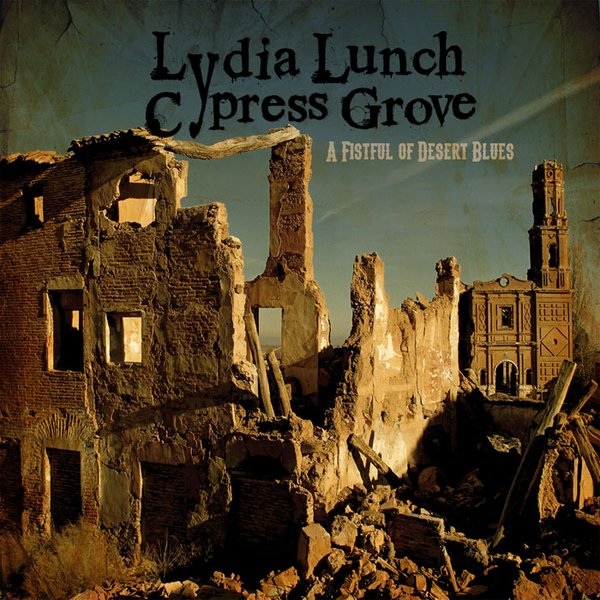 Lydia Lunch is an American singer, poet, writer, actress, and self-empowerment speaker whose career was spawned by the New York No Wave scene in the mid 70s. Though you may think that Cypress Grove is a band, instead Cypress Grove is the pseudonym for an English musician, singer, songwriter, composer, and producer born the same year as Lydia. Having worked together on a prior project, Cypress Grove and Lydia Lunch decided to record A Fistful of Desert Blues. I have seen Lydia’s name appear in print and in the record bins for years, but never felt motivated enough to investigate, so when this Rustblade promo arrived I did not know what to expect. The combination of the album title and the cover art conjured images of spaghetti westerns and a mythical Gothic southwestern US. And when the first notes hit my ears I was not disappointed. Lydia has a distinctive voice, a raspy voice destroyed by years of abuse and smoking. Sometimes it is a bit hard to tolerate and at others her voice greatly compliments the music. Most of the twelve tracks are songs. However, the opening track, “Sandpit,” with its musical accompaniment evoking images of midnight in the Chihuahuan Desert is a poetic recitation along the lines of William S. Burroughs. The other tracks vary from simple song structures to more complex mood pieces, all united by the blasted desert and sinister ambiance of the music and Lydia’s lyrics. The disc takes things up a notch with the arrival of track 4, “Revolver,” as “the man with no name” walks into town. This is followed by the excellent “Beautiful Liar” that reminded me of Leonard Cohen’s “Waiting for a Miracle.” And disturbing lyrics jump out of the blue: “In another man’s arms I’ve planned your demise.” Another song of note is “I’ll Be Damned” that reminded me of Ween’s pseudo-Mexican reading of “Buenos Tardes Amigo.” All in all quite an entertaining disc if you yearn for a mythical West. Well over half of the disc is worthy of note with sometimes catchy melodies.

Michael Fahres - The Tubes – This one falls into the "environmental music" category. German artist Michael Fahres "composed" these pieces using sounds found in nature or from sources not originally intended for this purpose. He...  (2008) » Read more