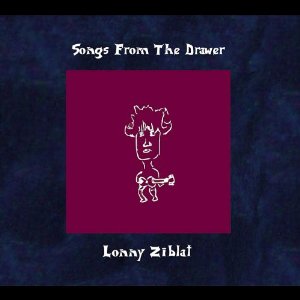 It took a while, but Lonny Ziblat won me over with this set of songs. On the surface, Songs from the Drawer is a singer-songwriter effort from Dutch multi-instrumentalist Ziblat, who handles all instruments, voices, and programming himself, barring a bit of violin and viola from guest Sonja Helasvuo. Some songs are very simple and child-like ("If I Were a Tree"), even featuring some silly "wah-wah" backing vocals, while some reach into the sophisticated pop territory of XTC ("Black Hill"). His cover of "Tomorrow," from McCartney's first Wings album, fits right in with the original tunes, and features a really tasty guitar solo. That cover tune also gives a clue as to Ziblat's intentions and influences. There are also a number of instrumental tracks functioning as brief interludes between the songs. "My Little Quality" is a lovely example, a melancholy waltz with a dream-like quality. Acoustic guitar provides the backbone of most songs, though other stringed instruments and keyboards also show up in supporting roles. And the vocals are strong throughout, whether closely-miked lead parts or massed backing. The overall mood is light but not frivolous, and the quality of the songwriting is impressive, venturing well beyond three or four chord cliches. File Songs from the Drawer alongside the efforts of Andy Partridge, Peter Blegvad, Martin Newell, David Yazbek, Kevin Gilbert, and the like. Worth seeking out.