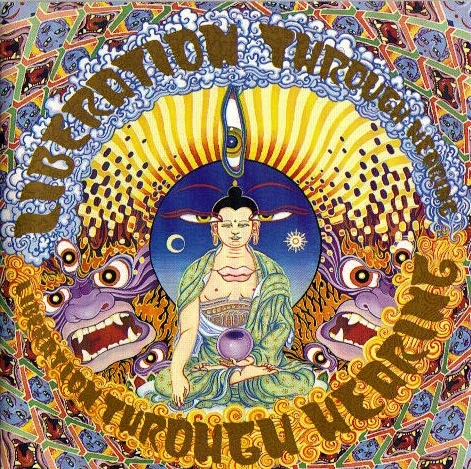 How to describe this? Let's first consider the music: although it doesn't say exactly who plays on the album, one may hear synths, percussion, flutes, sax, drums, bass, guitars, plus some Eastern instruments like dholak, tamboura, and sitar. The music varies between something akin to Saddar Bazaar meets Ashra in techno-land to more funky and jazzy space-rock variations on repeating themes. Loops and other studio gimmickry are used as well, but overall the music – considered on its own, stands strong as background music goes, keeping the project in a constant state of forward motion. On top of this musical bed, we have some guy with a strong German or Austrian accent reciting parts of the Tibetan Book of the Dead in a steady monotone stream of consciousness; this goes on through the entire album, with almost no purely musical breaks. For this listener it becomes really tiresome after a few minutes into the first track (of five), though it certainly may be of some greater value for those who want to use the album for meditation purposes, or something else like that. At any rate, file under very unusual.