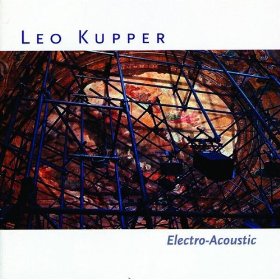 You have to admit, with a title as academic sounding as this, one would not be unjustified in expecting a musical experience on the equivalent stimulation level of a botany lecture. That "new music" mindset that associates gain with pain. Whether or not Leo Kupper is a major subscriber to that theory is still up in the air; this baffling CD actually presents material to both support and refute the idea. Refutation clearly comes in the form of the first three compositions, dominated by the santur - a kind of hammer dulcimer used in North Indian music. Before we go further however, it must be noted that Kupper has sequenced the work into three sets of material. Well, this trio of santur pieces towers over everything that follows. The tonal and textural qualities of the instrument are such that abuse is near impossible. Smooth, soothing, and easy to imbibe, these aural massages revel in a mood liberated utterly from the restraint of "systems" and other such constraining devices. So far so good I say; we trundle on. Group two is scored for prepared guitar, accompanied by fluttering electronic effects and voices. Nice, but clearly a turn away from what was an even more promising direction. And unfortunately thereafter we drop further. Two marathoners clocking in at a combined forty-five minutes finish things off. A droning, spacious backdrop, and intermittent electro effects, provide bedding for what I can only describe as bits of vocal exercises, on the first. The second deals mainly with experiments in spoken voice overlay and juxtaposition. Not my cup of tea. But what frustrates is that the best material comprises merely thirteen minutes of the overall length. The guitar works add an additional twelve. But as for the rest, well let's just say it contributes the negative element to quite an unholy mixture.