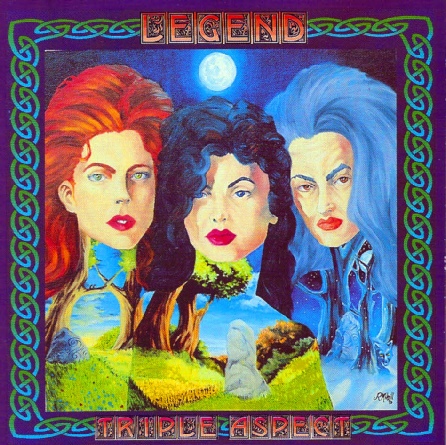 Move over Annie Haslam. Legend is a British Pagan prog-rock band, fronted by the amazing voice of Debbie Chapman. In fact this writer heard their first record Light in Extension about five years ago, and aside from Chapman's voice, wasn't that impressed with it, mainly on count of the very simplistic neo-prog style that the band seemed to be playing in at that time, compounded by the drummer's inability to do anything but keep time — loudly. Much has changed. In the interim there have been several personnel changes, leaving Chapman, keyboardist Steve Paine, and guitarist (and now bassist) Paul Thomson the only surviving members from that lineup, with a new, more animated drummer in John Macklin. Triple Aspect is the band's third album, and shows a tremendous amount of growth, both in the composition and chops departments. Their sound has evolved into an impressive driving progressive rock style, with Thomson's buzzing Hawkwind-like guitars providing the contrasts while the keyboards deliver magnificent walls of symphonic sound and ornate colorations as support to Chapman's vocals. One might be tempted to compare them to the Italian band Tale Cue, although Legend's approach is at once edgier and more skeletal, not quite as lush, with the vocals here more at the forefront. The centerpiece of the album is the 30-minute five-part title track, which covers a lot of ground and offers numerous key and time changes, as well as contrasting vocal sections and instrumental rave-ups all applied sensibly to keep the piece interesting over the long haul. The album's four shorter tracks deliver the goods as well, though in more succinct packages. Of special interest are "All Hallows Eve," where Chapman's voice (and the entire band) assume a darker more gothic tone, and the twelve minute "Lyonesse," which evolves from its more somber and moody beginning, through a lengthy passage for synth and voice, into the more upbeat rock ending with blazing leads from both guitar and synth. In all, an impressive release that most should find interesting and enjoyable. Three's a charm.

Get Thee Hence, Thou Silver Trio