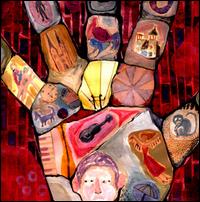 It's hard to believe that it's been nearly four years since this talented musician, composer and arranger suddenly left this world shortly after the release of the gorgeous album Andetag. Hollmer was a busy guy, and the CD portion of the album at hand is a collection of all the things he was working on in his Chickenhouse studio up until the time of his death, compiled by his son Gabriel. The range of styles that were Holmer's trademark are all represented here in abundance – rock, euro-folk, polka, Latin, klezmer, classical, avant-progressive, all embellished with his unique perspective. The CD is packed with 26 songs that are at once joyful, twisted, brilliant, and just plain fun. Songs like "Kanske," a vocal track barely one minute long, proclaim Hollmer’s unique sense of musical humor. Some of the longer instrumental cuts (meaning a full two or three minutes!) like "Vendelvarianter" and "Tivolimarsch" sport elaborated arrangements that are nothing short of stunning and beautiful. Hollmer's main instrument on his solo work was always the accordion, but here he plays everything, including all keyboards, percussion, ukulele, mandolin, drum programming, and of course vocals, gracing every song with exactly what's needed to bring out the best in the composition, while the music jumps freely from one style to another, keeping the disc interesting and energized from beginning to end. But wait! There’s a DVD included here too, and it's the real deal, not just some incidental miscellany. The first part is a professional shoot of Hollmer's performance at the Gouveia art-rock festival in April 2005. The 45 minute set begins with a half dozen songs performed solo on accordion, melodica and vocals, after which he’s joined by Michel Berckmans on bassoon for a handful more. For the last tune "Talrika," Hollmer is joined by the full six-piece Miriodor for their first live performance together of a song they collaborated on for Miriodor's Parade album. Extras include a non-pro, yet still thoroughly enjoyable shoot of a half hour intimate performance as a duo with accordionist Fizzè at a café in Switzerland in February 2005, and a very short interview following the performance at Gouveia. In all, this is a superb package all around, and gets my highest recommendation.