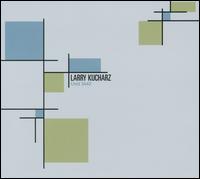 New York musician and composer Larry Kucharz’s latest CD continues the artist’s embrace of modern trends in the worlds of electronic music, including dance, techno, dub and chill. When wedded to his core competency in ambient minimalism one gets a brand of EM that packs a nice musical punch without leaving your ears ringing. And Kucharz’s interest in the avant garde means his music is often lodged somewhere between the rational and the intuitive areas of your brain. The 11 tracks fall into two categories: either rhythmic and kinetic, or ambient and subdued. These are hugely simplistic descriptors, but they do work. A conceptual shroud surrounds the first four tracks, titled “Life,” “Love,” “Binary Birth,” and “Binary Funeral,” and collectively packaged as the Binary Suite. Behind the subdued percussion, chill atmospherics and textural subtleties, Kucharz weaves sonic devices to evoke the respective themes. On the more energetic side of the ledger are tracks like “Quirky Trance” and “Do It” that feature skittering hi-hat, metronomic beats, and over-caffeinated synth pulses. For my money the ambient and techno-chill pieces are the most successful, even though the more lively tracks are the ones most likely to provide Kucharz with some commercial attention and payback. I think Kucharz is long overdue for some success, both in terms of media recognition (though I sure wouldn’t want to have to please the reviewers for the New York Times) and commercial success. Hopefully this is the sort of thing that will deliver it.

Unit IA42 occupies a region of electronic music in between some of the more common streams. Much too active for typical ambient, it features percussive parts on most tracks, generally the kind of trebly clicks and hisses that remind me of a tiny rodent playing a mouse-sized drum kit. The lack of a thumping bottom end disqualifies it for dance music (except possibly of an academic variety, modern ballet rather than dance club). But it's also not richly arranged enough to qualify as full-blown electronic symphony of the sort pioneered by Synergy albums back in the 70s. The mouse drummer is backing slow washes of string-like tones for the most part, with medium-tempo marimba tones on some tracks, spotty organ-like chords on others, and sometimes blippy synth sounds. And what are the washes backing? Generally nothing. There are no melodies, which for me pushes this out of the realm of music for active listening into something more like Eno's original ambient music. As the set progresses, the energy level ramps up a bit, flirting with dancefloor rhythms, but remains in the nether zone without committing to asking you to dance. Pleasant enough background music for doing other things, maybe reading a novel about robots or reorganizing the CD shelf. Maybe I should say reorganizing your digital files to get with the technological theme. But sit still and just pay attention to it? I don't think so. I've listened to it at least a half dozen times, and I am not hearing anything new that wasn't apparent on the first or second play.

Believe - World Is Round – Believe are one of the fastest working bands in the progland, this being their fourth album in five years. Founder Mirek Gil (ex-Collage) seems to feel that success will come from building an audience...  (2011) » Read more

Premiata Forneria Marconi - 10 Anni Live 1971-1981 – The saga of PFM is one of the most interesting and revealing of all of the "progressive" symphonic rock greats. With PFM you see the birth of the Italian classical rock scene, you see a band...  (1997) » Read more

Suns of Arqa - Selected Catalog 1979-2000 – Suns of Arqa started in the late 70s, first gaining notice as the touring band for reggae star Prince Far-I. Bassist / multi-instrumentalist Michael Wadada has been a constant in the band which has...  (2003) » Read more

Jasun Martz - The Pillory - The Battle – This 2-CD set is supposed to be a sequel to Martz’s original Pillory album, which I have not heard (anyone want to send me a copy?). This ambitious undertaking, split into the CDs “The...  (2005) » Read more