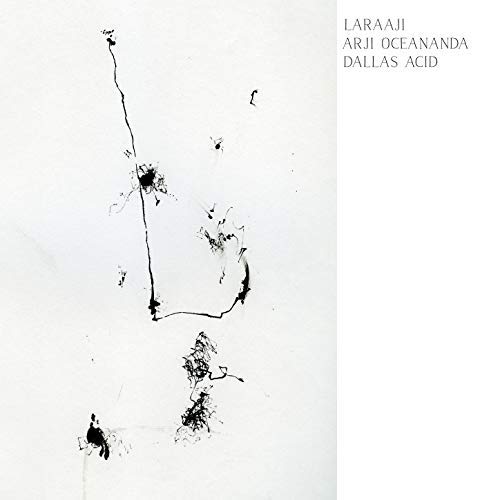 In another time in an alternate universe, I will be trapped in a loop where I review this album every night for eternity, and find something subtle, some new feeling, a different perspective each time through. As it stands I’ve been listening to this for a couple months now and it saddens me that when this review is completed, I will need to move on to my next ‘ambient’ album review and put this one on the shelf until some special time when it commands me to revisit. Arrive without Leaving is a chance collaboration between three different artists who shared a billing at National Sawdust, a six-hour session of sonic exploration at Vibromonk Studios in Brooklyn; the session went so well that they agreed to meet and record the disc at hand the very next day. Laraaji is mainly an electric zither player (although he contributes some soaring wordless vocals here and here) and although he is best known for his work in the 80s and 90s beginning with Ambient 3 (Day of Radiance) produced by Brian Eno, and later collaborations with Roger Eno, Channel Light Vessel, and others, he has continued to release music right up through the present at regular intervals (with over 50 releases to his credit). Arji Oceananda (Arjhiroula Cakouros) is a sound healer, musician and long-time collaborator of Laraaji’s, and here she plays kalimba, hand chimes, flute, synthesized strings, and percussion. Dallas Acid (more commonly known as D.A.) is a synthesizer trio from Austin, Texas with a half-dozen releases, inspired by German and French electronic music of the 70s, ambient music and early minimalism; the members are Micheal Gerner and Christian Havins, who contribute synthesizers and Mellotron here, and Linda Beecroft, who plays steel tongue drum and gongs. The music on these five long tracks floats beautifully as it warmly caresses the soul, morphing slowly as they go, the synths deep diving creating mystifying textures and ambient melodic sweeps, while the zither adds random coloration and the random percussive elements add some punctuation to the proceedings. Because much of the sound here is sourced from non-synth elements, but heavily processed nonetheless, this is very different from the works of most of the floating ambient practitioners of the day, giving it a more serene and natural feel. There’s a world of shimmering sonic beauty here to envelop the listener.