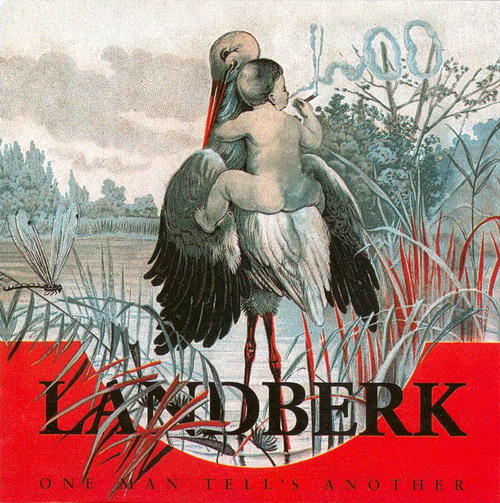 Landberk are one-third of the new wave of prog-rock from Sweden, along with countrymen Änglagård and Anekdoten. As with the other two bands, the sound here is based mostly upon organic, 70s-style instruments (like Hammond organs, Mellotrons, Rickenbacker bass, etc.) but with a 90s edge in the writing and production. One Man Tell's Another is Landberk's second offering and those who enjoyed their first one (Lonely Land) are sure to enjoy this one as well. The band is a five-piece, with a dedicated lead vocalist. But for a frontman who doesn't carry any other weight in the band, Patric Helje's voice is pretty thin and lacking confidence and strength. Furthermore, the lyrics (in English) suffer from the same overblown gothic imagery that Anekdoten's did (ex. "I am lonely/Wonder how you feel/Sit in darkness/Naked in my room"). While Landberk sound very much like Anekdoten overall, they approach the music with significantly less enthusiasm and energy, the result being like a subdued boil rather than the explosiveness the writing begs for. Since they also take a much simpler approach in songwriting, perhaps this suggests Landberk are already pushing their limits as an ensemble. There certainly are some fine moments on this album, but not enough to seriously compete with Änglagård or Anekdoten in this arena.

My first reaction to hearing this, the latest release from yet another of Sweden's newer bands, was, "What?" The opening chords sound all too similar to half a dozen or so U2 songs. However, this moment is soon over, and while Landberk has taken a slightly different approach here than on their debut, they haven't sold out or commercialized. Landberk has never been a band to impress one with complexity, rather they take a more atmospheric approach. The use of analog instruments and soft, yet ominous, interludes, reminds me of the slower moments of early Black Sabbath, with a touch of Crimson thrown in. While the guitarist has a style that mixes heavy riffing and discordant melodies, the rest of the band does little more than follow along. Throughout most of the album the drummer plods along, though he does lay down some interesting beats on a few of the tracks. The bass and keyboards add to the atmosphere, but contribute little else. Vocals are entirely in English this time, and the vocalist's style is very hit or miss. While some may like his strained singing, I find it rather distracting. Landberk's emphasis seems to be on vocally-oriented music, with predictable rhythms and structures. This isn't a bad release, though I find that little of it moves me. Outside of the guitarist's interesting textures and the brooding intensity, this album leaves me wanting. Recommended to those who enjoyed Landberk's debut.