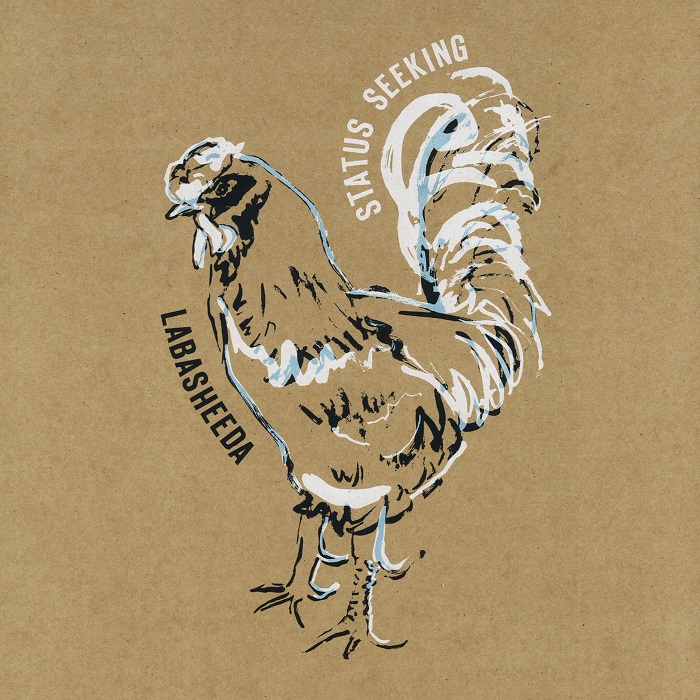 Formed in 2004 in Amsterdam, Labasheeda has released five full length vinyl-only releases over their career thus far, as well as a number of EPs, but Status Seeking is their first LP since 2015’s Changing Lights. The core of the band is based around singer / guitarist / violinist Saskia van der Giessen and guitarist / bassist Arne Wolfswinkel. Through the years, there has been a regular turnover in the rhythm section, and for this latest album we have drummer Edwin Slothouber on about half of the tracks, with Luca Fiandr on the others, with the latter handling bass duties on two cuts. Backing singer Danielle Pijpers rounds out the lineup with Bas van Waard guesting on cello on several tracks. Van der Giessen’s vocal presence is strangely commanding as she leads the group through a set that could best be described as experimental art-punk, the twelve pieces are all of succinct length, sometimes manic, other times more laid back, often distorted and over-the-top. While the vocals are a bit more lo-fi and fragile, and the instrumental backing more straightforward, I’m often reminded a bit of classic era Siouxsie and the Banshees. When violin is used it primarily offers a single driving element that cuts through everything else with power and simplicity. Many of the tunes here are quite catchy, with driving rhythms and overt hooks, like “False Flag,” “The Adversary” and opener “Dark Dream.” A more subtle and shimmery fragility can be found on other numbers like “Elusive Girl,” “No Guarantees” and to a degree “Crossing Lines,” while many of the cuts combine elements of both, for example “Reunion,” “Interruption” and “Uncomfortable Objects.” There is definitely a compelling mix of melody, aggression and simplicity throughout the twelve cuts of Status Seeking, I suspect that Labasheeda is a great band to see live.

Free - Songs of Yesterday – The roots of popular blues based rock and roll are firmly tied to that of Free, a four piece act from the late 60s that had both singer and composer Paul Rogers and drummer Simon Kirke (later of Bad...  (2005) » Read more