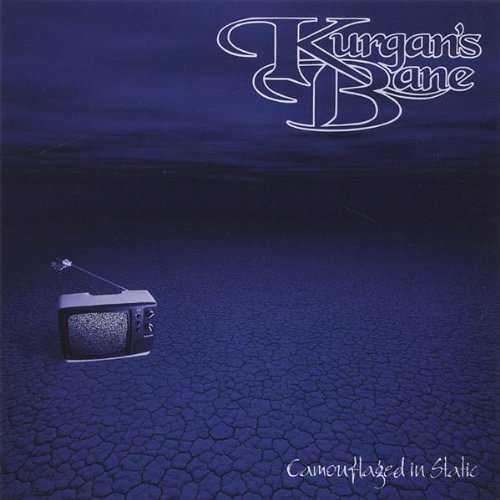 On the basis of this, their third disc, Kurgan’s Bane needs something extra. Perhaps they don’t want it but there it is. Camouflaged in Static seems a somewhat naked disc, occupying a place somewhere in the hard rock realm and flirting with metal. A couple of lengthier tracks veer more firmly into metal, though at that they don’t stand out from the pack to make a defining statement. The core band of guitar, bass, and drums are certainly up to the task technically, but they often drag themselves along for mostly uninspiring vocal sections. Unfortunately, there are plenty of instrumental breaks where they don’t excite either. They do occasionally gather steam, but this could also be a contextual impression formed against the self-similar, paint-by-numbers melodies that appear throughout. “Surface,” with similar tempo and compositional variants, almost seems an inferior job of self-plagiarism when I remember the album opener, “I’m Alive,” which itself turns out to be a good song due to its picking up some passion along the way. Perhaps noting this caused them to change the last refrain of “of the night” to “I’m alive” as an attempt to tie the songs together. Or perhaps vocalist Lisa Francis added it out of habit. It could be that my less than stellar impression could result from a lack of interest in the field in which they’re operating, or it could be that the disc is a bit on the banal side. Take your pick.