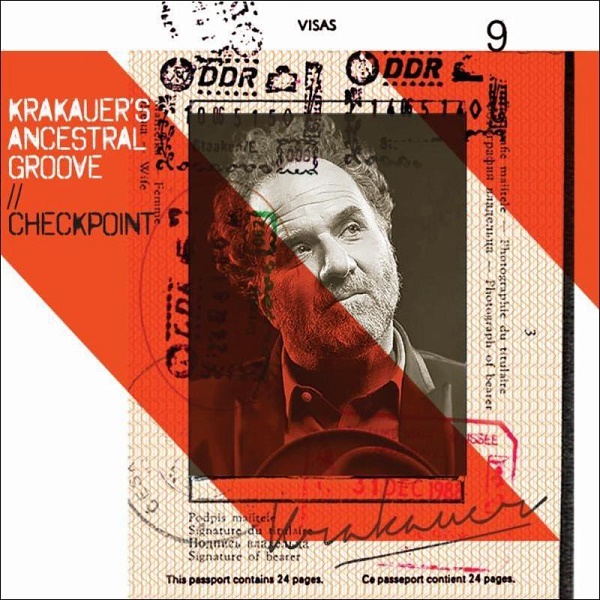 In the last couple decades, a lot of bands have mixed klezmer sounds into rock — I don’t know who the first was, but there have been quite a lot — and in jazz there’s a long tradition of gypsy jazz that has a similar flavor. Clarinetist Dave Krakauer does both of those along with some touches of modern hip-hop production, so Krakauer’s virtuosic, warbly melodies swirl acrobatically atop funky grooves that are sometimes augmented by samples and electronic percussion in addition to drum kit, bass, keyboards, and guitar. In terms of other bands we’ve covered at Exposé, it’s like a jazzier take on what Slivovitz does with an infusion of electronics — and of course there’s a similarity to Krakauer’s former band, The Klezmatics. Krakauer’s clarinet has the same kind of giddy, mind-boggling fluidity that you hear with Ivo Popazov. Notes are slippery, gliding microtonally or developing vibrato even when they move quickly, and his melodies are full of jumping octaves. In the backing band, guitarist Sheryl Bailey is equally at home providing jazzy, funky chords or stepping out for a fiery solo, providing a gritty contrast to Krakauer’s reedy tones. Jeremy “Keepalive” Flower handles samples, some of which are obvious, like vocal snips from old records, but others are often indistinguishable within the context of the music, meshing in with Michael Sarin’s drum parts. Special guests contribute organ (John Medeski), electric guitar (Marc Ribot), and accordion (Rob Curto). The levels of inventiveness and technique are high on Checkpoint, but aside from the clarinet, are presented subtly and with a sense of fun that is very engaging.

Sándor Szabó / Kevin Kastning - Resonance & Parallel Crossings – These are two collections of duos featuring New England based Kevin Kastning and Hungarian born guitarist Sándor Szabó, the latter with a number of previous releases to his credit. The...  (2008) » Read more