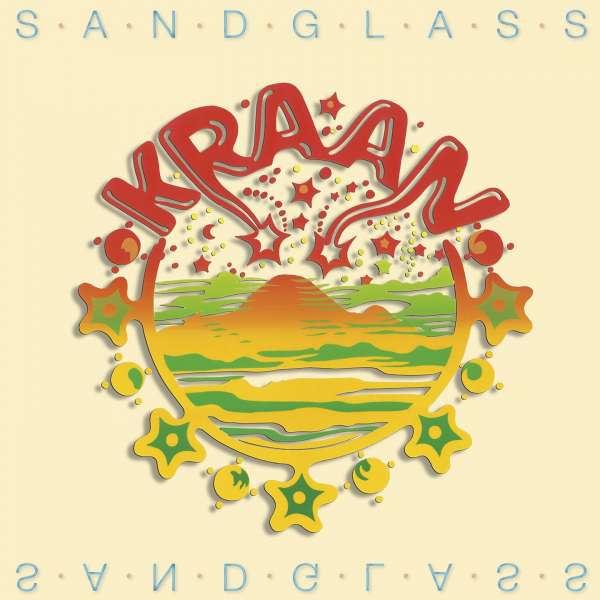 It’s been around ten years since Kraan’s last studio album, Diamonds, so this new one is long overdue, though the thirteen tracks here (nine if one purchases the LP) have certainly been worth the wait — all memorable, all of the highest order. For the past ten years Kraan has been the trio of Peter Wolbrandt (guitar), Jan Fride (drums), and Hellmut Hattler (bass) after many years as a quartet with the late keyboardist Ingo Bischof. Here, they utilize several guest keyboardists on several cuts, including Bischof on one track. Under most circumstances I would have solidly recommended that anyone new to the band, which has been together in one form or another since 1970, start with one of their many live albums (I believe they have seven live albums throughout their career now), as they tend to collect their best studio cuts and drive them home with exceptional performances Sandglass is a real exception, one of the band’s finest studio albums to date, easily comparable to any of their pre-1977 studio recordings. Several of the album’s best cuts are instrumentals (or close to it) like “Schöner Wird’s Nicht,” “Funky Blue,” the mellow and dreamy “Moonshine on Sunflowers,” and the stylish and tasty “Gleis 10,” all of which combine elements of rock, jazz, and funk, often with psychedelic notes, in only the way Kraan can do it, and never overstay their welcome. The opening title track builds quickly in funky style with a memorable sitar-effected guitar refrain, the vocals seeming almost inconsequential under the powerful instrumental work. The seemingly Hendrix-inspired “Rescue” makes for a laid back bluesy jazz-rock hybrid that takes the listener through several verses of barely discernible vocals. The powerful and funky number “Solitude” with its memorable refrain is one of the album’s immediate standouts, with a classic instrumental break led by Hattler’s bass and a superlative solo by Wolbrandt. Likewise, “Pick Peat” is a forward driving instrumental power tune with some great backing horns by Joo Kraus. Carrying forward with an almost-Beatles psychedelic sensibility, “Das Meer” pushes Kraan’s style outward into new directions, while “Hallo Kante” follows a funky albeit trippy instrumental groove for two and a half minutes before vocals are introduced – however briefly – making it another of the album’s most memorable tunes. In summary, Sandglass is Kraan doing what they do best and in abundance.

Finisterre - Finisterre – Finisterre is another debut from the country with more bands than fans. While many of Italy's newer outfits fall squarely in mediocrity, Finisterre looks like one of the brighter spots. The band...  (1995) » Read more