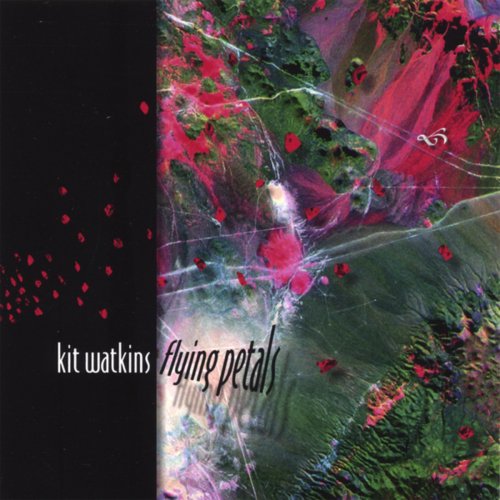 Haven’t heard much from Kit since Rolling Curve and three related ambient releases in 2001. Flying Petals is one of four new releases for 2004 (this, plus two new ambient releases Unraveled and This Time and Space, a reissue of 1982’s Frames of Mind, and a new release Guard Lock Skin by his improvisational world fusion trio Tome Ghost Ether have all been released pretty much simultaneously). The compositions herein could generally be described as upbeat symphonic electronica, in many ways similar to earlier works like Labyrinth, although most of the material here is far more percussively charged. Most pieces start with complex rhythms of sampled percussion, then build melodic structures over it using keyboard synths, and occasionally guitars and sax as well. Some, like “Savannah 13,” are pretty much rhythm workouts all the way through. “Todi K” and “Neptune Goddess” take a more subtle approach, elevating the melodic elements in a more typically progressive rock style. “Bowels of the Agency” takes the Bush administration to task for its intelligence failures, using voice samples from statements by GWB, Cheney, Rumsfeld, Condi Rice and others over a droning backdrop interspersed with more percussive based passages, making for one of the disc’s most interesting cuts. Treated voices and obscured lyrics on “Time Can Talk” join the main theme in unison, while “Call of the Z’Antuu” begins as a gentle introspective solo piece before busy rhythms guide it to its conclusion. Fans of Watkins’ previous solo works will find plenty of interest herein.