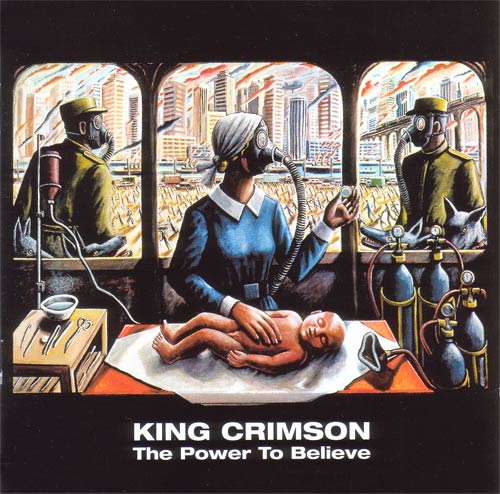 The majority of King Crimson tunes since Vrooom consist of the following sections: interlocking guitar parts reminiscent of the Discipline era, done in varying speeds; chunky, stuttery chords offsetting the two guitars; dramatic power chords in unusual intervals topped by single notes, usually in a high range, but sometimes low; drifting soundscapes of guitar or guitar synthesizer (usually on a Mellotron-like string sound). Throw in an occasional Belew ballad, and you can cover virtually everything they’ve recorded on three studio albums and innumerable EP’s and live releases. All you need to do is mix up the parts. As far as I can tell, The Power to Believe throws two new tricks into the bag. One is the warped heavy metal riffing of “Happy with What You Have to Be Happy With” and “Facts of Life,” the other is the slow buildup of “Dangerous Curves,” which is a bit like “Talking Drum.” My guess is that most people who have liked recent Crimson releases will also like this one, but it’s not likely to win many new converts among those who haven’t, or prefer other eras of the band’s work. That being said, I have to admit I find this CD eminently enjoyable, sort of a distillation of the essence of current Crimson art. I don’t know if I’ll be willing to accept another CD of variations on these same themes, however, so I hope a change is coming.