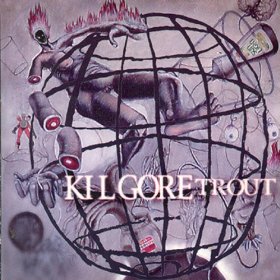 Kilgore Trout has been kicking around the Northwest for some years now, after relocating here from the Northeast. This migration to Seattle might be typical for a rock band, especially a really loud one, but is quite unusual for a jazz group. But then, Kilgore Trout is a really loud jazz group. In fact, their music owes as much in sound to King Crimson as to Miles Davis, with lightning rhythms in odd meters (they’re especially fond of 5/4) and Fripp-like guitar riffs. It seems the band makes some effort to distance themselves from jazz, not wanting to be associated with the sleepy mellowness that passes in that genre these days. Just as well — Kenny G fans would probably run from the room covering their ears given a blast of KGT full on. This CD captures the full glory of the band admirably. It starts with a blast of noise, with guitarist Niall Bloom thrashing on a distorted chord and trumpeter Brian Sorum and sax player Stephen Farraro squawking raucously. Then the guitar and bass fire off a lightning unison riff like the demonic spawn of Ornette Coleman and Al Dimeola. The piece, called “Al Harsh,” alternates that scenario with two others of varying tempos: a funky section with interlocking guitar and bass and languid horn lines (under a blistering guitar solo and a wild sax excursion); and a strange little triplet section. The band’s basic MO has been established: tricky unison sections juxtaposed with edgy soloing, all favoring a rhythmic complexity that inspires much wonderment for a beat-counter like me. From time to time, like at the beginning of the ten minute “Lizard Dog Suite,” calmer moods prevail, but never for long. Intensity is the operative principle. Recommended for fans of tight ensemble playing and odd meters, and of rock-oriented jazz which doesn’t fit into the fusion stereotypes.

Steve Roach - Arc of Passion – "Passion" is one of those loaded words. For instance, though it dealt with a fictional account of the life and death of Jesus of Nazareth, Martin Scorcese’s film Passion (for which Peter Gabriel...  (2009) » Read more