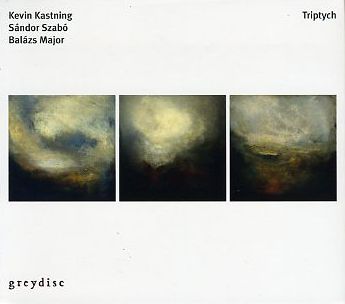 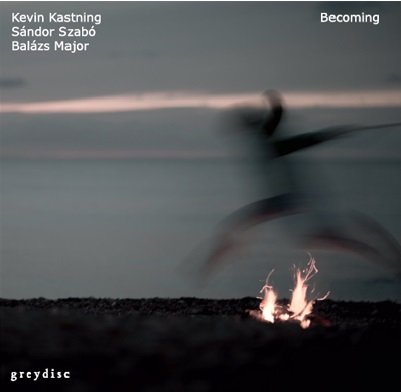 For their fifth album, Triptych, guitarists Kevin Kastning (USA) and Sándor Szabó (Hungary) are joined by Hungarian percussionist Balázs Major. As one might expect this is a very acoustic affair, the three musicians assembled in a Hungarian cathedral to perform a dozen tracks that convey a variety of moods and impressions. The music sometimes swings, as in “Harangok,” and then there are moments when the interlocking strings evoke the Crafty school, perhaps best seen in “Kaszama.” The textures and resonances are often unusual, due to the unique choice of instruments. Kastning favors a 12-string baritone guitar of his own creation, as well as a 12-string alto guitar, while Szabó plays a 16-string guitar as well as traditional classical guitar. Major sits between them in the aural picture, employing a panoply of percussion including cymbals and clay pots, plus assorted folk and ethnic hand drums. Some might label this experimental music, but to me the trio are tapping into something much more primal and spiritually ancient. There are traces of exotic modalities in several tracks, while elsewhere you get the sense that no script is being followed, just the musicians’ quest to channel something beyond musical performance. The material feels scripted at times, though I sense there’s also a healthy degree of improvisation being employed. The lines often blur, with the results equally intriguing and mystifying. For fans of modern or experimental acoustic guitar music this album would seem a no-brainer, though its appeal extends to all seekers of the within.

In all the music I've heard from Kevin Kastning (both with and without his frequent collaborator Sándor Szabó), one thing that has not been present is any kind of percussion. They've used a wide variety of instruments, mostly stringed, and Kastning has also worked with woodwinds, but no percussion. So when Triptych crossed my desk, I was hopeful — maybe the energy level would notch up a bit. The meditative moods in the previous releases were quite pleasant, but it seemed like propulsion was something I could use for a change. I also looked forward to some tones in the lower frequency ranges. Acoustic guitars, even those in the baritone range, have some lovely resonances, but there's never anything down in the frequencies you'll feel in your chest. The good news is that some of my hopes are realized in these two collaborations with percussionist Balász Major; the bad news is that some weren't. Triptych starts with the three-part title suite, and in the first, the percussion consists entirely of cymbals backing the two acoustic guitars. Part two adds what sounds like a ghatam (clay pot), which provides a nice pulse but stays entirely in the upper frequency register. Part three returns to cymbals. It's not until track 8 that we hear something new. The entire album was recorded in a single day, so I'll assume it's largely improvised, though as is typical with Kastning/Szabó releases, the degree of coordination is high. No chaos here, just beautiful unconventional sounds. There seem to be some sections the two guitarists have worked out in advance, at least in rough form.

Becoming reunites the trio for another set, and this time the sonic palette is expanded a bit, with all three musicians increasing the number of instruments played. Kastning adds piano to his array of custom guitars; Szabó contributes Chinese guzheng; Major expands his percussion arsenal a bit as well. The guzheng in particular brings a welcome change to the sound; the piano is used so little as to be invisible. But the main difference seems to be more down to the players' moods than the instrumentation. They seem to have been in a more playful, energetic mood than in the earlier outing. The set's shortest track, "A Doubled Reflecting," is a good example: 1:11 of eighth notes ricocheting between the guitars backed by driving cymbals and ghatam. I'm presuming Major has developed a technique that allows him to play cymbals with a stick in one hand while playing the pot with the other. These recordings of acoustic stringed instruments combined with percussion from around the world remind me at times of Oregon's early outings, though the sound is really like nothing else. Becoming would be my recommendation for a new listener's starting point into the unique world of Kastning and company.

Suns of Arqa - Selected Catalog 1979-2000 – Suns of Arqa started in the late 70s, first gaining notice as the touring band for reggae star Prince Far-I. Bassist / multi-instrumentalist Michael Wadada has been a constant in the band which has...  (2003) » Read more

Elephants through a Microscope