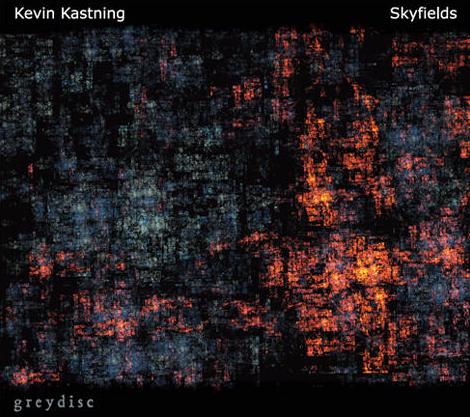 There is no one quite like Kevin Kastning. Stretching back well over 20 years and two dozen or more releases, both solo and in collaboration with other like-minded players, the gutarist, composer and instrument inventor has established and developed a unique sound that can at once be identified as his own, but could never be called predictable. Every measure has its own new horizon, its own vocabulary, and could take off in just about any direction. On Skyfields, his approach is entiely solo and uneffected (with the exception of plenty of studio reverb enhancement), played exclusively on his 15-string extended clasical guitar and double-neck 36-string contraguitar. One needs to see these instruments to appreciate their sound, which is easily accomplished with a visit to his website, stopping at the ‘instruments’ page and then the ‘listen’ page; indeed, Kastning lives in a musical world of his own creation, like no other. For Skyfields, some passages may occasionally remind of Pat Metheny’s early work, John Abercrombie’s Characters, or even Steve Tibbets’ Northern Song (without the drums), but those are just brief anecdotal comparisons that gauge the effect on the listener and nothing more, although I believe Kastning’s vision is a similar one, hovering somewhere between jazz, classical, ambient and avant-garde. The 62+ minute title track, broken into five long parts, comprises the entire disc, and is (as always on any of Kastning’s work) completely instrumental. There are few repeating phrases, no steady rhythms, but plenty of rich tonal colors, harmonics, and open atmospheres. While one might dismiss this as self-indulgent noodling on a casual first listen, there’s plenty of emotion, clarity and brilliance here to reward the listener with patience and perseverence.