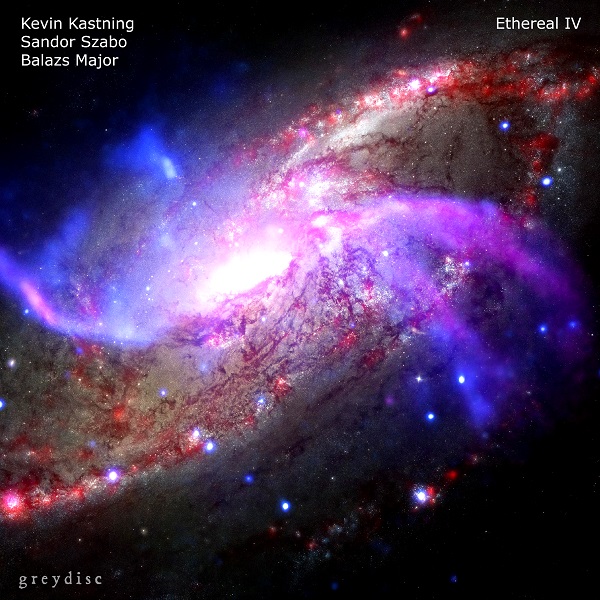 Regular readers of Exposé should need no introduction to Kastning, Szabó, or Major, we have reviewed many of their releases previously, including all of the previous three in the Ethereal series, and although two of those didn’t involve percussionist Balász Major, the theme is similar — dreamy and surrealistic improvised sounds that open new sonic portals to provide the listener with a quieting spiritual feeling. These three musicians have been working together long enough for each to instinctively know the others’ next move long before it happens. Within this sparse element, the trio has produced six long tracks that at times are so tight they seem to be composed, and I suspect to some degree that is true, but when one listens, it’s evident that in what’s going down here, that much of it could only be the product of well-rehearsed improvisation. Major’s percussion is varied throughout the six cuts, sometimes consisting of hand drums, cymbals, and other lighter touches that seem to exist just below the surface, operating as a guide track for the guitarists to drive within, and often enough there is no discernible percussion at all. The tracks are simply titled “First Occurrence,” “Second Occurrence,” and so on out to the sixth, but across eight or nine minutes a lot can change, including a complete change in direction, while still keeping the spirit of the piece intact. Kastning plays his 30-string contra-alto guitar throughout, though with that he can achieve a panoramic variety of acoustic sounds, both as lead player and support. Szabó brings a number of instruments to the sessions — baritone electric guitars mostly, but guzheng and esraj as well, plus live processing and effects employed throughout the sessions. A listener can hear how all of these unique elements fit together like a puzzle to produce any desired feeling from one moment to the next as each piece proceeds; Ethereal IV opens any number of new doors for listeners seeking alternate new horizons.