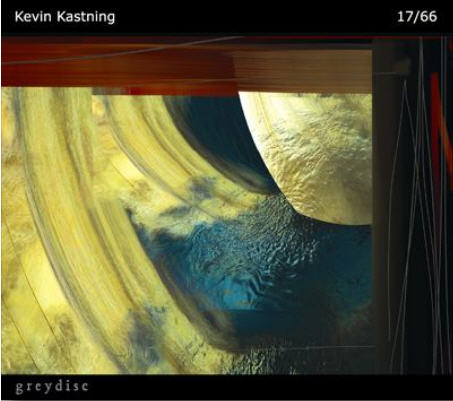 Kastning has released nearly thirty albums on the Greydisc label since around 2000 (both solo and collaborations with folks like Sandor Szabo, Carl Clements, Michael Manring, Balasz Major, Mark Wingfield and many others), and 17/66 is his fourth solo release. His music is completely outside of all genre classifications, perhaps a bit of classical, jazz, avant, Americana and ambient figure into Kastning’s stylistic palette, but the results are truly his own. His guitar inventions are legendary (refer to his website for a complete description of his stringed instruments, tunings, etc.), and on this collection of nine tracks grouped into three suites, he uses his 36-string Double Contraguitar, his 30-string Contra-Alto guitar (36+30 = 66), both are double-neck designs, and his 17-string Hybrid Extended Classical guitar. These are all played without any effects or distortion (other than studio reverb) and are essential to his unique style. One can spend hours marvelling at all these guitar designs and other technical aspects (and believe me, I have, many times) but when these magical instruments meet the recording studio in Kastning’s hands, with his compositions and improvisations in tow, the only thing that matters is what effect it all has on the listener. All these strings have a very impressive range, but the compositions tend toward sparseness, leaving space as the one ingredient that sparks the imagination. The result is often a sense of stillness and solitude, a place where motion speeds and slows as the composer creates on the spot. The feeling one gets is sometimes reminiscent of the quieter parts of Steve Tibbetts’ Northern Song, but here there are no drums, no percussion, no beat to anchor the wanderings of the various guitars, other than what the bass and baritone registers of the guitar incidentally provide. I could go on for many paragraphs attempting to describe this sound and the resulting feeling, and would probably still fail to convey the mystery. I guess the only way to understand is to experience it for yourself, and if one hasn’t heard any of Kastning’s work before, 17/66 is a perfect starting point.