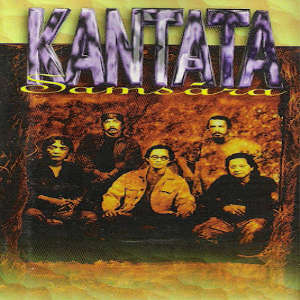 For background information, go dig up a copy of Expose #14, and find the review where I spent half a page trying to describe a CD by Iwan Fals. Here, the XTC/Sting/Cat Stevens-influenced singer/songwriter turns up as a member of an eight-piece Indonesian rock band. Western rock — guitars, keyboards, drums, the whole nine yards. Not to cop-out, but I think some comparisons are in order. The problem is I can't think of any! Uriah Heep? Procol Harum? Traffic? Certainly the very early 70s is where Kantata is coming from, a time when this kind of hard rock (with unmistakable prog elements) was common radio fare. Organ, guitar, and singing dominate the arrangements. That timeless 70s sound that most Euro-American groups abandoned after say 1978. A time when an album by even Alice Cooper would whisk you through a myriad different moods and stylistic approaches. The sole 80s element I hear is an extra slab of distorted sludge on the electric guitar. Instantly though, the listener can sense the most unique trait in Kantata's sound, something that markedly distinguishes them from anyone else: their vocals, which regularly find three or more rambunctious testosterone-pumped men in chorus, all growling and barking out the lyrics with an exuberance like a fight song at a war rally. What they are singing about is an Indonesian's guess but I imagine given the unrest their country has faced that some heavy social commentary is all over this CD. ("Demokrasi" shows up in one song). How much of the appeal to Samsara is sheer novelty is often tough to discern, but Samsara is as good as probably half the albums I review in this magazine. If I ever happen to be in Jakarta I'll check the local CD outlet for some Kantata titles.