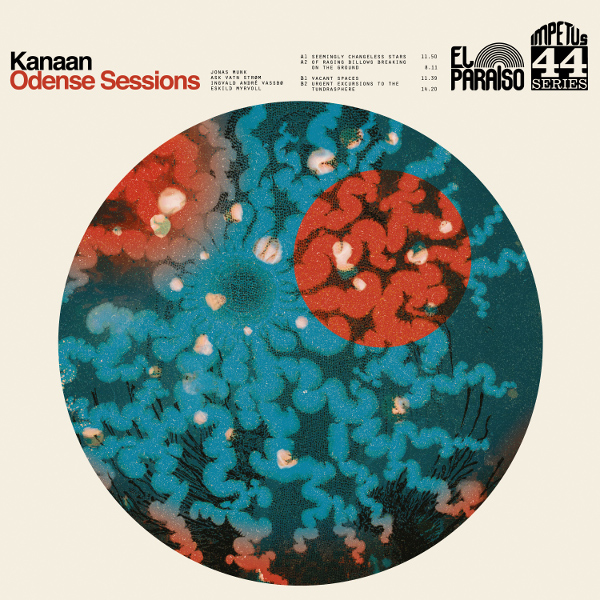 On Kanaan’s second offering, the Oslo based trio teams up with Causa Sui’s Jonas Munk for a set of four improvisation-based numbers, two per album side. Odense studio, owned by Munk, is where most of El Paraiso’s magic goes down. The band’s first release, Windborne from 2018, showed the band to be far more promising than most, with a debut that sounded like a group of seasoned veterans, combining elements of psychedelic rock, jazz, fusion, and pure unbridled energy, yet always with delicacy and finesse, never even the least bit sloppy or sludgy. The same rudimentary style applies to Odense Sessions, with the change being that their sound here is more open and free, with some additional space injected, and additional guitar shimmer from Munk (he plays guitar on every cut and occasional synths), occasionally dropping into some dreamy passages with the whole band in tow. Drummer Ingvald André Vassbø and bassist Eskild Myrvoll maintain a fluid, driving rhythm that follows the general energy level of whatever the passage at hand demands, while guitarists Ask Vatn Strøm and Munk maintain an almost telepathic connection as they slide effortlessly from one passage to the next, reminiscent a bit of the classic Grateful Dead’s Garcia and Weir on their wide open adventures. Opener “Seemingly Changeless Stars” runs the full gamut over its twelve minutes, starting almost softly and slowly building in intensity as the piece proceeds, unearthing sonic treasures as it goes forward until it reaches a manic strength toward the end. At only eight minutes “Of Raging Billows Breaking on the Ground” kicks right into psychedelic rock, but eases up at the two minute mark while the band goes forward more exploratively, but ultimately finds their way back to the master groove. The appropriately titled “Vacant Spaces” makes excellent use of space as it slowly winds its way up to the fourteen minute “Urgent Excursions to the Tundrasphere,” that gently steps into full-blown psychedelic rock with all guns blazing (including some synths), all four players are pushing their boundaries as the piece marches forward, until its sparser gentle closing section.