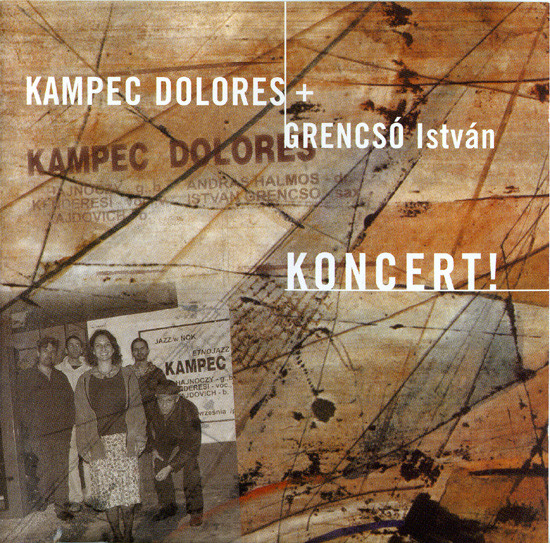 After seeing the name Kampec Dolores around for several years, I finally get to hear them. While I’m still unfamiliar with their studio work, I’m happy to report that they put on an outstanding live show. For having six musicians, there’s an amazing amount of space in the music. Most of the tracks feature an up-front bass line with good grooves on the drums and subtle percussion. Guitar is the only chordal instrument, and its parts are generally clean and rhythmic, not busy or sustained. Grencsó’s saxes, flute, and recorder provide great solos and a jazzy touch, with some judiciously-used controlled squawking, a sound which complements Gabi Kendresi’s singing well, as she utilizes a number of non-standard vocal techniques, jumping registers (i.e.—yodeling), growling, and swooping, among others. She manages to balance avant-garde vocalizing with melodicism and good taste better than just about any other “extreme” singer (I’m thinking of Diamanda Galás and Meredith Monk). Her tone often reminds me of the singing in Hedningarna (an impression heightened by the similarity in sound between the Hungarian and Finnish languages) and sometimes a little of Björk; her intonation and expression (though I have no idea what she’s singing) are both outstanding. There are some moments that break up the momentum of the show in a pleasant way, like the appropriately titled “Kalimba” with its African flavor, rolling triplet rhythm, and sometimes chant-like vocals. All in all, it’s a wonderful disc, and seems to work as an introduction to this unique band.