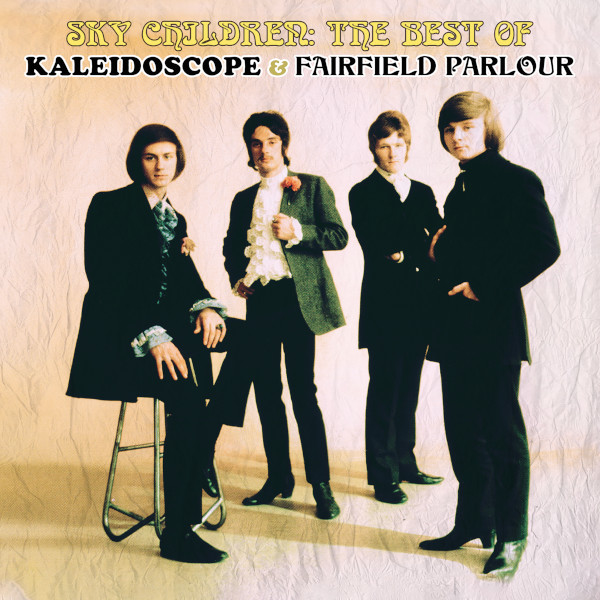 In the burgeoning psychedelic scene of the late 60s there were several bands named Kaleidsope: a Latin American band, a Los Angeles band, and a British band. The British Kaleidoscope emerged from the British scene in 1967 and released a pair of stellar and highly col­lectable albums (Tangerine Dream and Faintly Blowing) but they never achieved commercial success. In 1970, after switching labels from Fontana to Vertigo, they morphed into Fairfield Parlour, recorded one album From Home to Home in 1970, and then called it quits. Then, as Kaleidoscope, they recorded a third and final album White Faced Lady in 1971, but did not release it for 20 years. This newly mastered anthology collects some key album cuts including their hit “Bordeaux Rosé,” “The Sky Children,” “Snapdragon,” and the magnificent “Music.” An early 1964 demo track from their pre-Kaleidoscope days as The Sidekicks closes the collection with a cool garage beat song “What Can I Do.” If you’ve never been exposed to this band before, this new reissue is an excellent place to experience their brand of Syd Barrett-influenced trippy pop psych. In my opinion, their best songs are "Flight from Ashiya,” “A Dream for Julie,” “(Further Reflections) In the Room of Percussion,” “Emily,” and the simply amazing “Music” that is chock full of phase shifting, effects, reversed tapes, and all manner of trippy explorations. The companion DVD includes an additional 30 minutes of previously unreleased archive footage. The first video is their 1967 appearance on a black and white French TV show Le Petit Dimanche Illustré. As was typical back in the day, the band lip-synced their way through their songs ”Flight from Ashiya” and “Holiday Maker” and then a brief interview conducted by none other than Serge Gainsbourg. And of course there were the obligatory sexy go-go dancers who go through the moves, but never really connect with the music. The second video comes from German TV’s Beat Club, taped in 1970 but never aired. This color video again has the band lip-syncing to uninspired performances of “Free,” “Emily,” and “Sunny Side Circus” plus some vintage psychedelic video effects. The third video is from lead singer Peter Daltrey’ final show in 2017 with the band in London’s Hoxton Hall. Daltrey and original drummer Danny Bridgman are accompanied by several younger musicians to perform “Dive into Yesterday” and a stupendous performance of “Music.” Unfortunately, this video appears to be shot from the audience using a smart phone, so there is not a lot of variation in angles, close ups, etc, plus the lighting made everything blue. But that is a nit, just kick back and listen to the music. I wish that there was more of this 2017 concert on the DVD. Overall, a truly outstanding “best of” collection from this highly regarded 60s British psychedelic group.