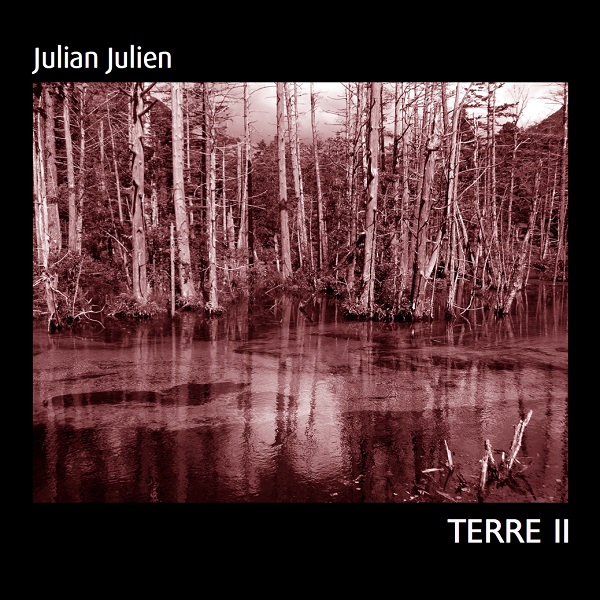 With Terre II, French composer Julian Julien operates in similar territory to Juha Kujanpää, combining a chamber ensemble with keyboards and a modern rhythm section, though the resulting music is different in mood and sound. Whereas Kujanpää features strings most heavily in his arrangements, Julien leans towards wind instruments, with clarinets and flutes prominent on most of the tracks. In addition, percussion has a more prominent role, often with jazzy grooves to the parts. There’s also a greater presence for signal processing, with some spacious atmospheres and moody echoing noises in places. The melodies and harmonies have a somewhat more modern flavor as well, and there are opportunities for improvisation for several of the players. The album consists of of a “Prelude” followed by six compositions for the ensemble alternating with mostly electronic pieces called “Iris I-VI.” These interludes provide some real highlights – I’m especially fond of “Iris IV,” which consists of a cornet solo by Médéric Collignon mangled by electronics and accented by bell-like synthesizer notes. The composed pieces range from the upbeat title track to very moody pieces, and even some that include both extremes. It’s not specified what kind of synthesizers are used (Julien is credited simply with “Composition et programmation”), but there’s a definite warmth to the tones, far from digital purity. There are bell tones similar to those prominent in New Age music, but they have an edge of distortion to them that lifts them away from cliché. The album closes with “Mr John Barry,” a fun tune featuring the bari sax and bongo drums to give it a groovy 60s soundtrack vibe, not specifically in the James Bond realm, but very nice. I’m unfamiliar with the first Terre from 2000, or any of Julien’s other work, but this new work shows a composer with a creative vision and a talented group of cohorts to realize that vision.