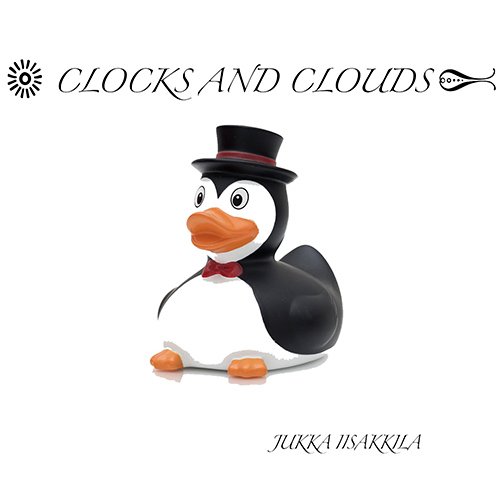 While Jukka Iisakkila (pronounced Eye-Sa-Keela) is probably best known in his native Finland as an orchestra conductor and a producer of other artists, including the pop band Goldfrapp and guitarist Steve Vai, he is also an outstanding multi-instrumentalist (mainly guitars and keyboards) with an interest in composing fusion instrumentals, which is precisely what the seven tracks on his new recording Clocks and Clouds are all about, much of which reflects his interest in both rock and classical music. Here he is joined by drummer Ilkka Saarikoski, who drives a busy bottom end while Iisakkila handles all the remaining instrumentation via multi-tracking. The seven minute opener, “Freefall,” displays a compositional savvy that both startles and stuns, and his fast pyrotechnic guitar soloing highlights much of the piece. Most of the structure and melody is handled by layers upon layers of keyboard variations, with some guitar comping. After a couple tunes in that vein, we come to the more overtly rocking “Inner Universe Fever,” where a powerful groove propels the piece forward with unbridled energy, until it reaches a quirky section that sounds a bit like some bits of Frank Zappa’s synclavier style. Throughout all of these tunes the powerful influence of classical music is never far away, and such is the case on “Interludes,” which bears little resemblance to jazz, or rock, or anything else for that matter, again sporting a somewhat programmed sound for much of its two-and-a-half minutes. The nearly seven minute title track carries on with a larger-than-life progressive rock sound somewhat reminiscent of the work of the late great Pekka Pohjola, and it stands as probably the most impressive piece on the entire disc. My only gripe is that many of the early pieces suffer from a somewhat muddy mix that obscures much of the compositional brilliance; that said, Clocks and Clouds stands as an exceptionally powerful statement.